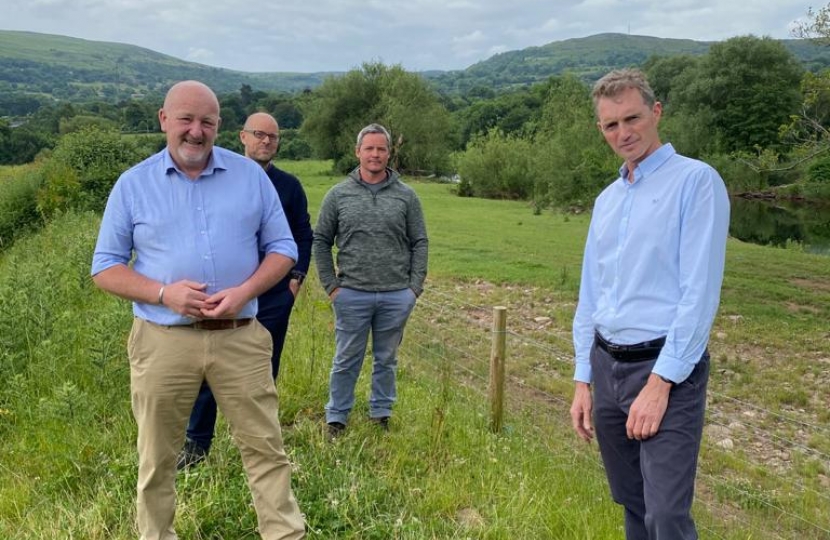 Questions remain over the future of a key river defence destroyed during Storm Dennis, leaving residents in Llanwenarth Citra fearful their homes are at risk of further flooding.

A large section of the flood barrier behind Mardy Farm – two miles west of Abergavenny - collapsed in February last year after the River Usk reached its highest level since 1979, flooding nearby properties in the valley to over two feet in depth.

Mardy Farm suffered considerable damage. Fences were ripped out and plant machinery was moved by the sheer force of the water, which reached waist height in the downstairs of the farmhouse.

Popular tourist spot Pyscodlyn Farm also saw a significant number of caravans ruined at its camping site, as well as the loss of livestock.

Once the water receded, emergency repair work was carried out. But Welsh Government sponsored body Natural Resources Wales (NRW) is currently refusing to adopt the bund and take on responsibility for its maintenance, and ensure there is sufficient resilience in the height of the bund for the future.

Businesses and families in this small rural community are worried that without proper ownership, the flood barrier may fail again.

They were joined by senior officers from highways and flood management at Monmouthshire County Council.

Mr Fox said: “The Monmouth constituency knows all too well the damage flooding can cause, where just last year people watched in horror as water gushed in and destroyed homes in Llanwenarth.

“Local people cannot be subjected to anything like the frightening ordeal they suffered during that tragic incident.

“That is why it is imperative this serious situation is rectified now and the Llanwenarth bund, a key river defence, is adopted by NRW and maintained.

“I will raise it with the appropriate Welsh Government minister without delay.”

Mr Davies added: “Residents are understandably worried about the bund failing again and still want answers as to why there was such a sudden rush of water down the River Usk from upstream in the early hours of that fateful morning last February.

“I am disappointed NRW could not attend the site meeting. We need to get the bund adopted and will be calling for urgent discussions.”

Welsh business hailed for helping lead world out of pandemic

A local business has been hailed for helping lead the world out of the Covid-19 pandemic.

Tri-Wall, with its UK head office based in Monmouth and six sites across Britain, continues to play an important role in the distribution of the vaccination programme.