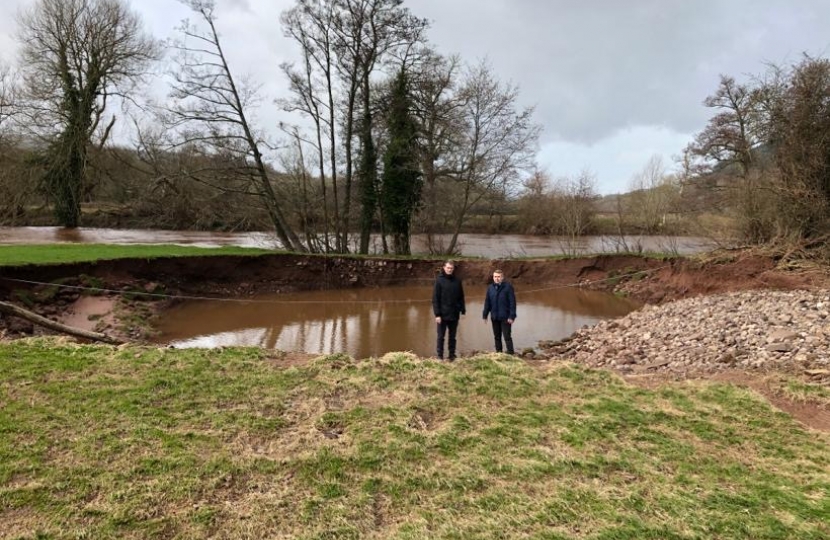 The clock is ticking to repair a flood bank in Llanwenarth Citra washed away during Storm Dennis.

A large section of the flood barrier behind Mardy Farm – two miles west of Abergavenny - collapsed after the River Usk reached its highest level since 1979, flooding nearby properties in the valley to over two feet in depth.

Mardy Farm suffered considerable damage. Fences were ripped out and plant machinery was moved by the sheer force of the water, which reached waist height in the downstairs of the farmhouse.

Popular tourist spot Pyscodlyn Farm saw a significant number of caravans ruined at its camping site, as well as the loss of livestock.

Monmouth MP David Davies and local County Councillor Giles Howard visited Llanwenarth on Saturday to take a look at the breached flood bank and meet some of the affected residents.

Urgent restoration of the flood defence was critical to life and family businesses within this small rural community, they said.

“The problem now is that with a large piece of the flood barrier gone there is nothing to prevent more flooding if the water rises again,” said Mr Davies.

“At the time of our visit, the River Usk was almost full to its banks and this gap is extremely worrying.

“Unfortunately, the original bank was built around 1900 so nobody knows who is responsible for it. The clock is ticking to get this sorted out quickly.”

Cllr Howard said: “My concern is not just the inability of the bank to help reduce the effect of a flood event on the scale of Storm Dennis, but that what might have previously been considered a more minor flood may now be just as devastating.

“Residents are at great risk of being flooded again, and at more regular intervals.

“We simply must do something to enable the breach to be repaired. With both the damage at Mardy Farm and Pyscodlyn Farm, there are two economic units that have suffered immensely and whilst they are trying to put their businesses back together, I sincerely hope it won’t be in vain.”

A yellow weather warning for more rain on Monday saw fears realised as the river rose again and flowed straight through the breach, causing further flooding.

“Normally with this type of alert, the river should be bank high only and contained by the flood barrier,” said Mr Davies.

“What we now have is an emergency situation as people and properties don’t even have a baseline of protection for the next round of rain.”

Monmouthshire County Council’s Emergency Response Team was due to meet on Monday, as well as the multi-agency Strategic Coordination Group chaired by Gwent Police.

Mr Davies said he was hopeful that all agencies would support an approach to the Welsh Government to secure approval for discretionary funding to be applied straight away to repairing the flood bank at Llanwenarth.