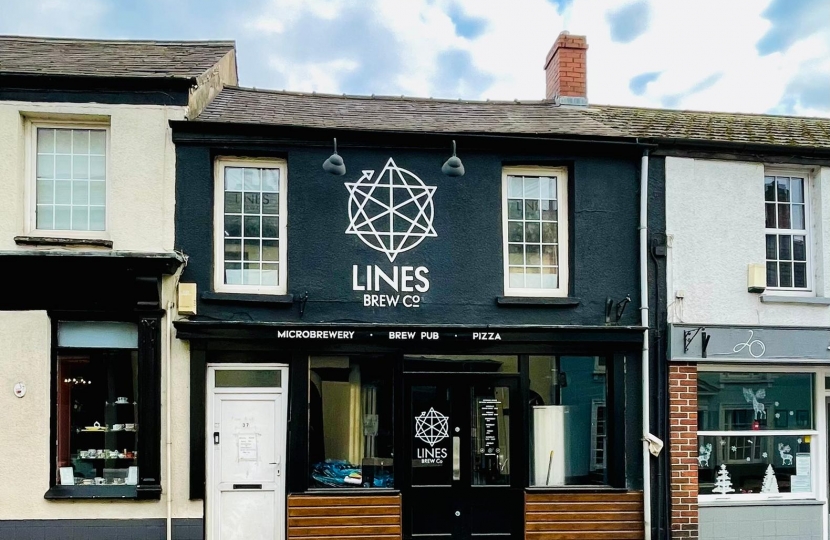 Hats off to beer enthusiast Tom Newman who has established a fantastic brewery in the heart of Monmouthshire. Lines Brew Co was born in 2016, brewing exotic and blended farmhouse beer. What is really surprising is that you can find this microbrewery, complete with brew pub and tap room, on the high street in Usk. There is fresh beer served straight from the taps and a range of homemade craft pizzas to tuck into. A small snug bar upstairs means customers can also walk past and watch the beer brewing. It was a pleasure to visit on Friday to learn about Lines’ position as one of the highest rated brewers in the UK and to discuss their vision of becoming fully sustainable by sourcing local produce and brewing using renewable energy. Tom was kind enough to let me sample the ‘Black Sun’ chocolate porter. It was truly outstanding. Find out more at www.linesbrewco.com

I have regularly updated readers on the legislation around cleaner rivers. As I have said before, recent UK Government legislation means water companies in England will face much stronger restrictions before being able to pump sewage into rivers at times of high rainfall. I have written to ask the Welsh Labour Government if similar legislation will be introduced in Wales. As yet, no reply has been received. But given that Labour activists were quick enough to accuse the UK Government of passing a law to "pump sewage into the rivers" when they had in fact become the first government to legislate for restrictions, I look forward to hearing a positive response shortly.

The annual spectacle of hundreds of Santa Clauses running through Monmouth was sorely missed in 2020 because of the Covid pandemic. Organised by the Spirit of Monmouth Running Club, the popular family event is an established part of the build-up to Christmas in the town and I am delighted it’s back this year on Sunday 5 December. I was the fastest male in 2009 and came third (I think!) in 2010. These days, the passage of time has taken its toll and I usually find myself being overtaken by a range of festive fancy dress costumes! But there is nothing like a good run for charity to get rid of a few cobwebs and burn off the calories consumed by one too many mince pies. All profits are going to Monmouthshire County Councils Children’s Services Teams Christmas Wishes campaign, which will be providing Christmas gifts for Monmouthshire’s most vulnerable children and young people.