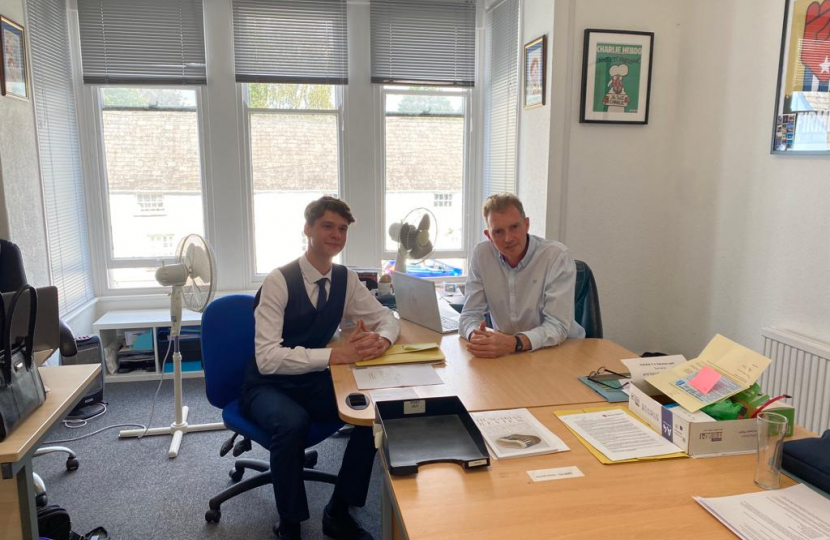 My thanks to Dŵr Cymru Welsh Water for a very positive and constructive meeting last week. I was joined by Peter Fox MS and Friends of the Lower Wye to discuss ongoing improvement actions on the Usk and Wye rivers. I am pleased to say things are moving in the right direction with major investments aimed at reducing phosphates and identifying opportunities where changes can be made fairly quickly. Welsh Water is injecting a further £100m in various projects over the next few years which will clean up the rivers of Wales. This is alongside the £10m already being invested in Usk to improve the town’s water treatment works and upgrade the combined storm overflow at Mill Lane. There are also plans to install more phosphate strippers at wastewater treatment works. We will be visiting a local plant in September to see the technology in action.

What an absolute pleasure it was to meet one of the many Ukrainian refugees living in the Chepstow area. Born and raised in Kyiv, 17-year-old Volodymyr Maliarevych was forced to flee his homeland after Russia invaded. He is working in a local hotel over the summer to support his family while his father fights in the Ukrainian army. He is also studying politics at a local school and wanted to pop into the constituency office in Usk for a chat about life as an MP. I thoroughly enjoyed our conversation, although the circumstances which brought us together are somewhat harrowing. I very much look forward to welcoming Volodymyr to Parliament in the autumn for work experience and extend the same invitation to any A-level or university students with an interest in politics. They certainly do not have to be supporters of the Conservative Party but due to demand, my priority is to prioritise constituents.

Four of Gwent’s longest-serving and community-minded residents were honoured at a prestigious ceremony on Monday 25 July. I felt incredibly proud to watch a much-loved colleague and great friend be presented with a British Empire Medal at Caldicot Castle. Cllr Maureen Powell has been an outstanding public servant and I know how hard she has worked for the people of Abergavenny – a real community champion! I am sure I speak for many in Maureen’s ward, Abergavenny town and the wider Monmouthshire county when I say we are incredibly grateful for everything she has done.