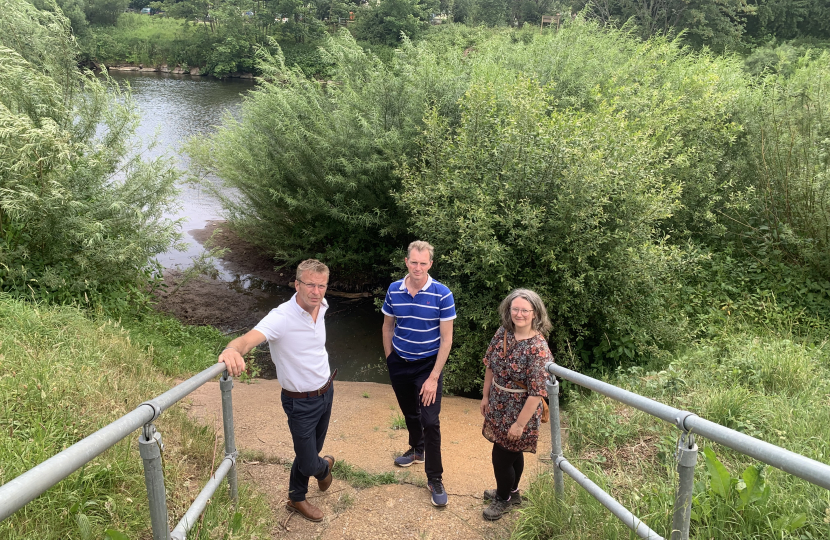 A huge cash boost to help reduce the number of sewage spills into the River Usk has been welcomed by local politicians.

More than £10m is being invested in Usk over the next three years to improve the town’s water treatment works and upgrade a combined storm overflow (CSO).

Dŵr Cymru Welsh Water said the CSO at the Mill Lane pumping station is designed to prevent sewage from backing up into homes, gardens and businesses during periods of heavy rain.

Instead, it discharges storm waters and very diluted sewage into the River Usk.

Some of the work already underway and due to be completed by mid-November includes the installation of a screening chamber and 6mm screen to stop items such as rags, wet wipes, sanitary products and large objects from reaching the river.

An application has also been submitted to Natural Resources Wales (NRW) so the CSO, which is currently unpermitted, is brought within the regulator’s framework.

Monmouth MP David Davies met officials from Welsh Water to discuss the investment works - which will be carried out in three phases - alongside Usk county councillor Tony Kear.

“I have been holding regular meetings with Welsh Water and NRW to discuss the issue of pollution in both the rivers Wye and Usk,” said Mr Davies.

“This specific problem has been raised by local people in Usk.

“We were told the Mill Lane pumping station sends sewage and drainage water to the Usk wastewater works where effluent is treated before being discharged into the river.

“If the pumping station cannot cope during times of high rainfall, then waste water is diverted to storage tanks. When these tanks become full, very dilute settled sewage is also released along with the treated effluent.”

In March 2021, temporary modifications were made to the pumping station to get more flow through to the wastewater treatment works. Additional work is now needed to increase capacity so more waste can be treated instead of using the CSO.

Welsh Water said removing the CSO completely was neither feasible nor affordable as it would entail a significant upgrade of Usk’s antiquated Victorian sewage network and cost an estimated £21m-£24m.

Mr Davies has called for the Welsh Government to replicate measures being taken by the UK Government via the Environment Bill, which will task the Environment Agency and water companies to cut the amount of sewage being discharged into rivers in England.

He added: “The UK Government recently voted to force water companies in England to cut the amount of untreated sewage going into rivers. Sadly, some political campaigns misleadingly portrayed this as a vote to allow water companies to put sewage into rivers, which is a complete mistruth.

“River management in Wales is the responsibility of the Welsh Labour Government. I would like to see the Senedd legislating for the same standards that are being put in place in England. However, I do welcome the work being done by Welsh Water not just in Usk but across the rest of Wales.

“As an organisation, Welsh Water has always been keen to meet with myself and others to answer questions about river pollution. I share the desire of everyone to tackle pollution - but constructive dialogue will be more effective than endless criticism.”

Cllr Kear has submitted a motion due to be considered at a full meeting of Monmouthshire County Council on Thursday (23 June) calling for cross-party support to ensure action is being taken to improve the health of the Wye and Usk rivers in Monmouthshire.

He said: “This is a hugely significant announcement by Welsh Water both in terms of the size of investment and recognition of the need to resolve the issues that have been raised around water quality, biodiversity, wildlife and decreasing fish numbers.

“The positive and constructive meetings I have had with David Davies MP and Peter Fox MS have facilitated direct dialogue with Welsh Water’s Wastewater Assets Team to press home the depth of feelings passionately expressed locally and in return, understand actions being taken for the Usk as well as the Wye.

“Those promised actions are underway in Usk with the mobilisation of a site compound at the athletic club, which I’m delighted to see.

“I’m now looking forward to gaining cross-party support for my motion on improving the health of our rivers in what will be my inaugural county council address this week”.