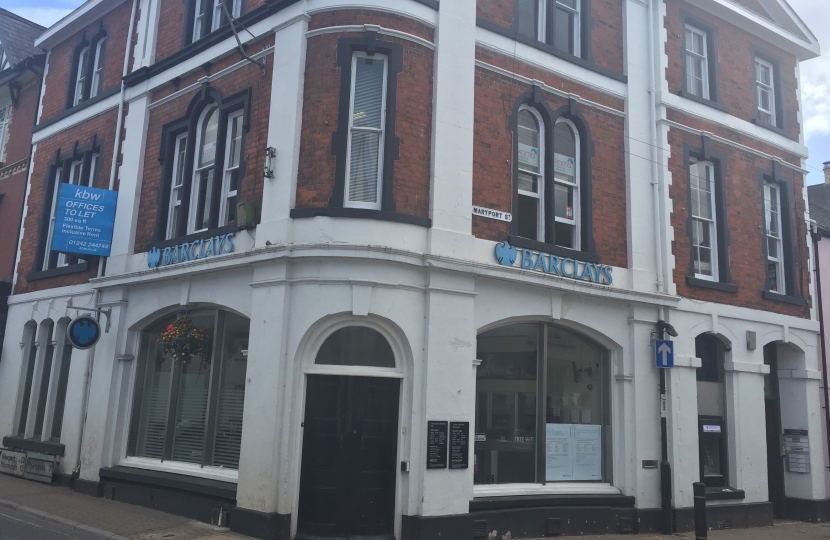 Residents in Usk have been hit with a "double whammy" after the town's last remaining bank and only Post Office both announced they would be closing.

The postmistress who runs Usk Post Office has tendered her resignation due to ill health, which will see the Bridge Street branch shut its doors on 26 September.

Just three weeks later and Barclays is set to close on 19 October, blaming low and falling transactional volumes for the decision.

And in a further twist, it appears Barclays was unaware of developments at Usk Post Office after advising customers to head there instead to make deposits and withdrawals.

“The way people choose to bank has changed radically in recent years and I fully accept there has been a big rise in online and mobile banking,” he said.

“However, there are still many everyday tasks which are best done over branch counters. Usk has a large elderly population and with the loss of the Post Office, local residents are facing the double whammy of being unable to carry out the most basic of transactions such as paying in a cheque or depositing cash.

“Both HSBC and NatWest have already left Usk. This is ultimately a commercial decision but I hoped Barclays might have felt some responsibility as the last remaining bank and the town’s main 24-hour cash point.”

Mr Davies has urged Barclays to stay open until a new operator and premises is found for the Post Office.

“I have been given an assurance that the Post Office is “totally committed” to providing a service in Usk and work is underway to find a solution as soon as practically possible,” he said.

“I have therefore asked Barclays Usk to delay closure until such time as Post Office services are maintained or restored in the town.

“Looking ahead, I trust measures will be put in place by Barclays to mitigate the impact of the branch closure on individuals and businesses. It is bound to cause inconvenience to begin with, especially for vulnerable customers and regular branch users.

“Another suggestion is to perhaps have a mobile banking service either in the form of a van or in another premises at least once a week. It is not ideal but certainly better than nothing.”