UPDATED: Calls for "dangerous" zebra crossing in Bulwark to be changed or moved 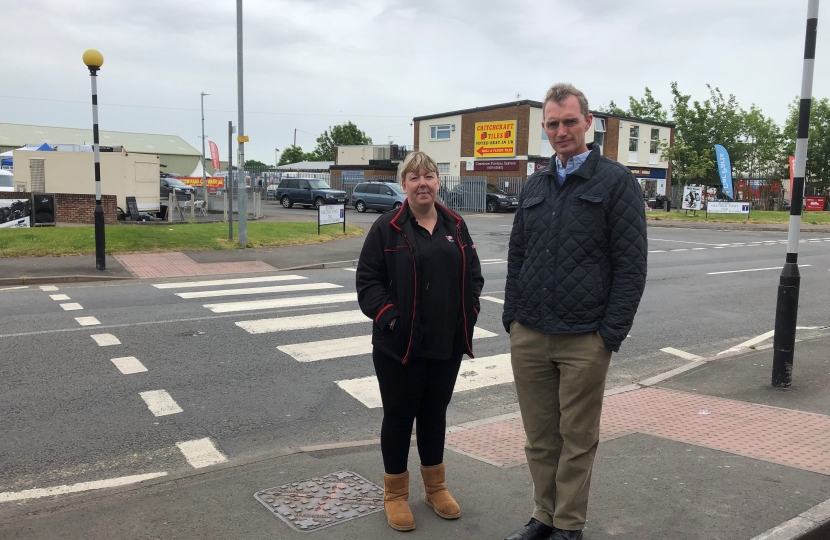 UPDATE: Funding has been granted by the Welsh Government to introduce a 20mph speed limit through Bulwark and Thornwell. Monmouthshire County Council has confirmed it will investigate the feasibility of relocating the pedestrian crossing on Bulwark Road as part of this.

David Davies has backed residents' calls for a "dangerous" pedestrian crossing in Bulwark, Chepstow, to be changed or moved.

The Monmouth MP has written to Monmouthshire County Council asking for the positioning of the crossing, near the Spar store on Bulwark Road, to be urgently looked at.

It comes after a teenage girl was recently hit by a car while crossing the road.

Mr Davies visited the site to meet with local resident Karen Zimmermann. Her 13 year-old daughter received minor injuries after being knocked over on the crossing in April.

He also spoke to nearby businesses and heard stories of other collisions and near misses. Concerns were raised that motorists are “frequently ignoring” the zebra crossing, which is used on a daily basis by schoolchildren and pensioners.

“There is a general consensus among the Bulwark community that this is a dangerous place to cross the road,” said Mr Davies.

“Residents and businesses clearly feel the pedestrian crossing is in the wrong location. It is next to a busy junction with Bulwark Industrial Estate, there are cars entering and exiting the row of shops, and there are two bus stops on opposite sides of the road.

“I would certainly argue there is an issue here with visibility which needs to be investigated and I have asked Monmouthshire Highways to look at the safety of this crossing.

“Improvements either need to be made or the crossing should be moved. Indeed, there are questions as to whether it is needed at all as there is a perfectly good pedestrian crossing with traffic lights further down the road by Lidl."

Pic cap: David Davies MP with Karen Zimmermann at the spot on Bulwark Road where calls are being made for a zebra crossing to be changed or moved.