Statement on the Agriculture Bill 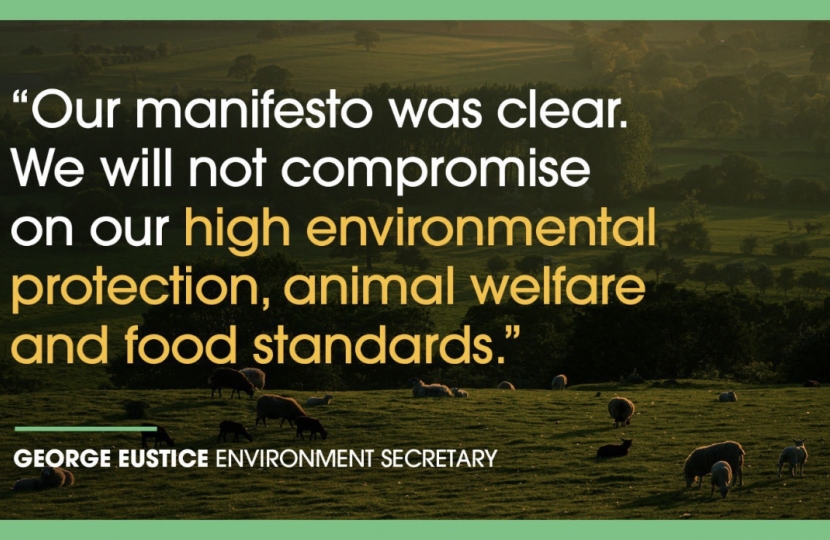 I have provided the same response to all constituents who have contacted my office over the last few days. The following covers the many issues raised in order to provide some clarity and reassurance.

Thank you for contacting me about food standards, future trade deals and the Agriculture Bill.

I fully recognise the public importance attached to the UK’s high standards of food production and the unique selling point it provides for our farmers, whose high-quality produce is in demand around the world.

In trade negotiations, I know the UK Government will not compromise on our high environmental protection, animal welfare and food safety standards, which is why I believe Amendment 93 made to the Agriculture Bill in the House of Lords is an unnecessary potential source of duplication and confusion. I would also like to assure you that the government will not compromise on matters relating to the health and wellbeing of our children during trade negotiations.

Without exception, all animal products imported into the UK under existing or future free trade agreements from all trading partners, including the EU and others, will have to meet our stringent food safety standards, as they do now. These standards have been built up over many years and have the trust of the public and the world. The government will not adjust those standards to secure trade deals. The standards will be based on science and decided by the UK alone.

I want to see a vibrant and resilient farming sector in the UK, and the UK’s newfound status as an independent trading nation has the potential to bring huge benefits to our farming industry, including our family-run farms. Indeed, new free trade agreements could lead to gains for UK agriculture. For example, analysis by the Department for International Trade shows an agreement with the US would strengthen UK farmers’ incomes.

I am pleased the government is engaging with the agricultural sector, including the National Farmers Union, as part of its trade discussions. The government has established the Trade and Agriculture Commission as well as trade advisory groups, ensuring British farmers, businesses, and consumers will play a central role in the nation’s trade policy. It is encouraging that Ministers share my determination to ensure our future trade agreements will deliver benefits for our brilliant farmers and food producers.

I welcome the establishment of a Trade and Agriculture Commission - a move supported by the National Farmers’ Unions in England, Scotland and Wales, as well as Northern Ireland’s Ulster Farmers’ Union.

I know how highly the British public value traditional family farming and the quality produce they provide. Please be assured the government will not undermine the position of family farms in any future trade negotiations. In fact, the Department for International Trade has been supporting family farms through the coronavirus crisis by helping them gain access to invaluable export opportunities.

Farming is a bedrock of our economy and environment, generating £112bn a year and helping shape some of our finest habitats and landscapes. I am pleased the government has guaranteed the annual farm budget for each year of this Parliament and nearly £3bn will top up the remaining EU funding to match the total funding for direct payments that was available for 2019.

The UK already imports food from countries such as Canada, South Africa and Japan through preferences in existing free trade agreements – none of these agreements require those countries to follow domestic UK production standards.

The amendments would have put up new trade barriers and prevented the government from being able to agree fair and mutually beneficial trade deals. Indeed, forcing all our trading partners to produce to UK domestic standards would only result in fewer export opportunities for our own farmers. In addition, the amendments, if implemented, would have caused real challenges for developing countries and our Commonwealth partners, as for them it would be particularly difficult to align with UK domestic production standards.

An agreement with the US could lower tariffs on products, including beef and cheese, creating new export opportunities for the UK’s high-quality producers. You may be interested to know that the National Sheep Association recently stated a free trade agreement with the US would benefit sheep farmers in all parts of country by creating new opportunities and driving demand.

Prices for premium products also tend to be higher in the US, so improved access will allow UK farmers to obtain high prices for their quality produce. It is also worth noting the US has relatively high costs of production compared to the UK. As an example, US beef is currently six per cent more expensive than EU beef.

I want to reassure you that the EU Withdrawal Act transfers all existing EU food safety provisions onto the UK statute book. This includes current import requirements, which for example ban the use of artificial growth hormones in domestic and imported products, and stipulate that no products besides potable water are approved to decontaminate poultry carcases.

I strongly welcome the agreement in principle of a UK-Japan free trade agreement. As well as securing tailored benefits and additional market access for UK businesses trading with Japan, this deal has also secured 70 geographical indications for iconic British food and drink products such as English sparkling wine and Welsh lamb. These protections outstrip those found in the EU-Japan FTA and set a powerful example for an innovative UK trade policy built on high food standards.

Regarding amendments made to the Agriculture Bill in the House of Lords relating to the composition and status of the Trade and Agriculture Commission, I know my ministerial colleagues are always considering how best to strengthen the machinery of government to ensure effective decision-making and scrutiny and I will continue to have discussions with them on these matters.

As you can imagine, I have received a large amount of correspondence on the Agriculture Bill, much of which as one of my excellent colleagues has delicately put it - come from scaremongering tactics from uninformed, non-agricultural campaigning organisations. I have responded to each person who has any concern, and while the above will hopefully alleviate some, I just want to finish by emphasising a few very important points:

The quality of food we import into this country will not change as a result of this Agriculture Bill. As agriculture is a devolved matter in Wales, the Bill mainly applies to England. That said, Welsh ministers and the Department for Agriculture, Environment and Rural Affairs will receive similar powers so they can start preparing new schemes.

I understand they plan to introduce a bespoke Agriculture (Wales) Bill which will set out the new framework, and I am assured my Welsh Conservative colleagues in the Welsh Parliament will be fully engaged throughout the legislative process. Already the UK Government has ensured the Welsh Government has the same level of funding for agriculture as under the Common Agricultural Policy.

Food from abroad comes in through specific trade deals. I will never vote for a deal that allows produce in that undercuts our farmers.

Farmers will not be undercut as a result of this Bill. Chlorinated chicken and hormone treated beef are illegal to import – and to produce – in this country. It will always remain so. Again, it will take a specific vote in Parliament to change that and make it law and I will never vote in favour of it. I will campaign against anything which lowers our food standards or harms the livelihoods of our farmers.

I hope this response has provided clarity and reassurance.