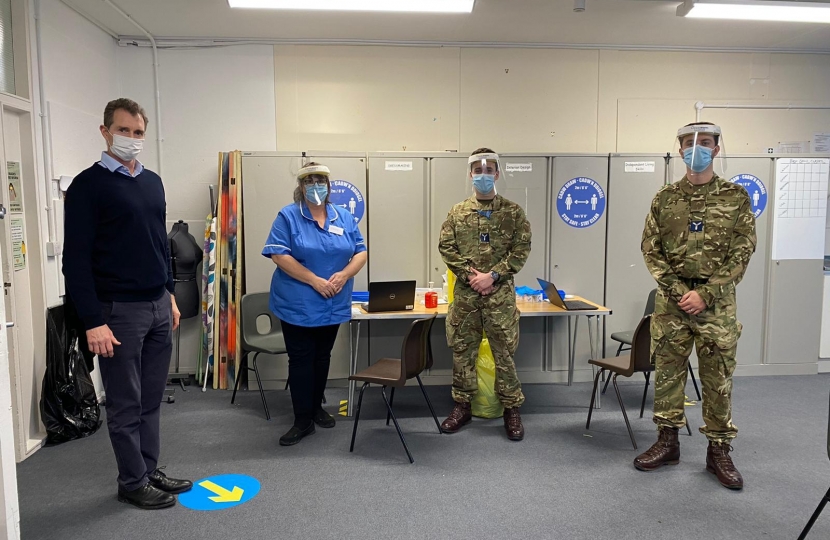 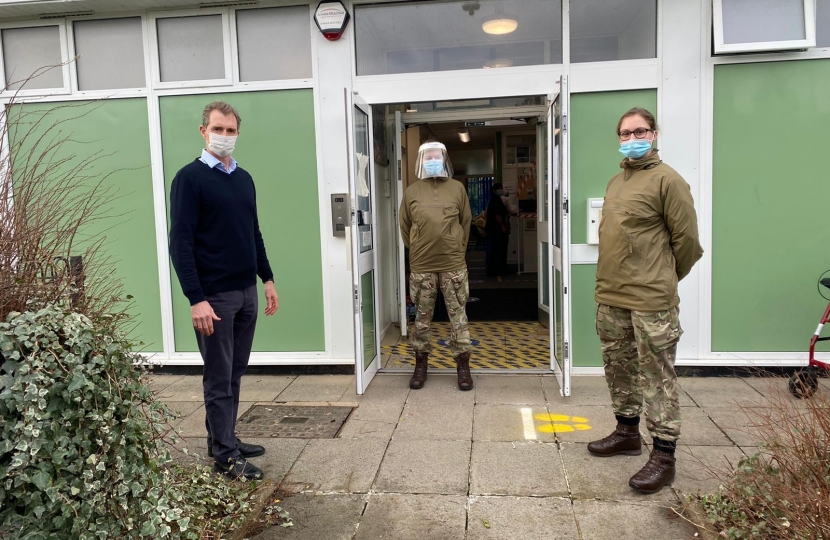 Nearly all GP practices in Monmouthshire are expected to have received supplies of the Oxford-AstraZeneca vaccine by Wednesday (20 January), an MP has said.

The roll-out comes as part of the Welsh Government target to vaccinate people in care homes, carers and the over-80s by mid-February.

Latest figures from Public Health Wales show 126,375 people, four per cent of the population, have received their first jab.

Monmouth MP David Davies was in Abergavenny at the weekend to meet NHS staff and RAF personnel who have set up a mass vaccination clinic at the Youth Centre on Old Hereford Road.

“A huge number of people have been in touch wanting to know when they are going to receive the vaccine,” he said.

“The first priority was to vaccinate elderly people in care homes and their carers. This started on 9th December and has nearly been completed.

“The next priority group are the over-80s who are being treated at the moment in centres like the one in Abergavenny.

“It is expected that by Wednesday, nearly every GP surgery in Monmouthshire will have been given supplies of the Oxford-AstraZeneca vaccine to start giving to patients.”

Mr Davies said some elderly residents had complained they had been told to go to Cwmbran to receive their jab.

But he said this was because the Cwmbran site – which is delivering about 900 jabs a day - had been set up to handle the Pfizer vaccine which needs to be stored at -70C.

The Oxford-AstraZeneca vaccine is easier to transport and can be stored at fridge temperature.

“The NHS advice is that time is of the essence and those who can travel should do so,” Mr Davies added.

“However, for those who cannot travel there will be alternative arrangements shortly as more supplies of the Oxford vaccine are made available to GPs.

Mr Davies said he understood there were plans for a mobile team to vaccinate house-bound vulnerable residents and he has asked Aneurin Bevan University Health Board to consider setting up a centre in Monmouth.

“I fully appreciate the concerns of all those who are waiting for the vaccine,” he said.

“It is a hugely complicated logistical process but there was a sense of complete determination from the NHS workers and RAF personnel who I met onsite.

“I know I speak for everyone in Monmouthshire in paying tribute to all those involved in delivering the vaccine and look forward to hearing more updates in the coming weeks.”