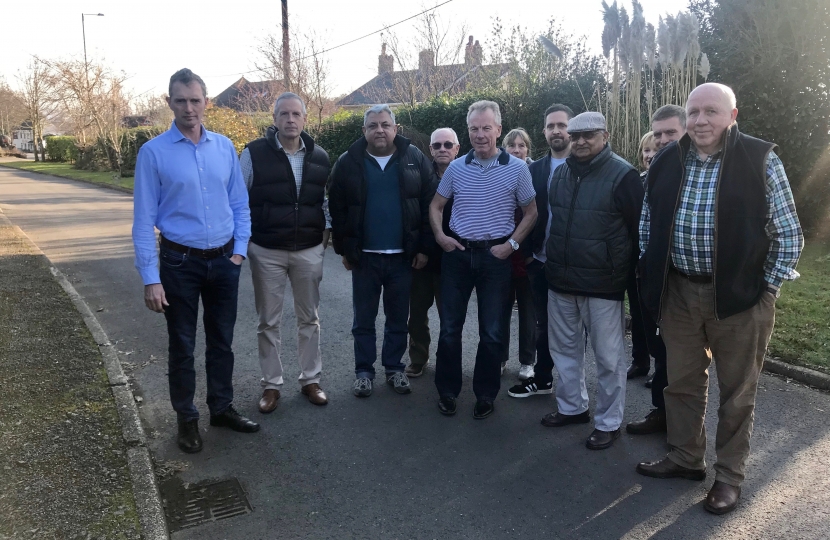 Frustrated residents in Ponthir are calling for a reduction in council tax after Torfaen County Borough Council’s repeated refusal to adopt their road despite more than two decades of requests.

Brechfa Close is considered “not suitable for adoption” with the local highway authority citing numerous reasons, such as the narrow width of the existing road, substantial wear to kerbs and footways, and the need for drainage to be upgraded.

However, there is an ongoing and historic service provision in Brechfa Close whereby the council maintains the streetlights and collects household rubbish.

Residents claim they have been left in a ‘halfway house’ situation with only partial services – yet pay full council tax with an increased precept every year.

They have now enlisted the support of Monmouth MP David Davies and local councillor Huw Bevan to put pressure on the council.

Mark Evans and his wife have lived in Brechfa Close since September 1997.

“The situation seems very unfair given that we as residents are required to pay full council tax for a partial service,” said Mr Evans.

“Several years ago when the road was in a poor state of repair, Torfaen council refused to help which resulted in the residents having to pay around £500 per household to have the road resurfaced.

“It is now in good condition, although the pavements do need work, but more concerning is the fact that the drains are never cleaned.

“I very much hope that some agreement can be reached with the council to resolve the matter and formally adopt the road, which would be the best solution.

“If this is not achievable there should be a proportionate reduction in the amount of council tax that we pay to compensate for the expense involved in the upkeep of the road.”

He said: “I am not getting full value for the amount of money that I am paying and would like to challenge the council to justify why I should pay this amount.”

David Davies MP has previously written to Torfaen council after visiting Brechfa Close and is now requesting a meeting with senior highways officials to discuss the adoption process.

“There have been over 20 years of excuses from the council, with conflicting responses as to why Brechfa Close is not suitable for adoption,” said Mr Davies.

“Unfortunately, the council seems unwilling to offer a proactive or methodical approach to possible adoption. Despite paying full council tax, residents are not getting a full service and they are quite right to feel aggrieved.

“It’s a shame that the level of commitment shown by residents in spending their own money in road surface improvements is not being reciprocated.”

In an email to Cllr Bevan, group leader for highway development control at Torfaen County Borough Council Paul Wheeldon said: “I know that we currently maintain the streetlights but really we should not.

“I would not however want to remove them from the maintenance schedule but would say that we are maintaining them without prejudice to the road being adopted.”