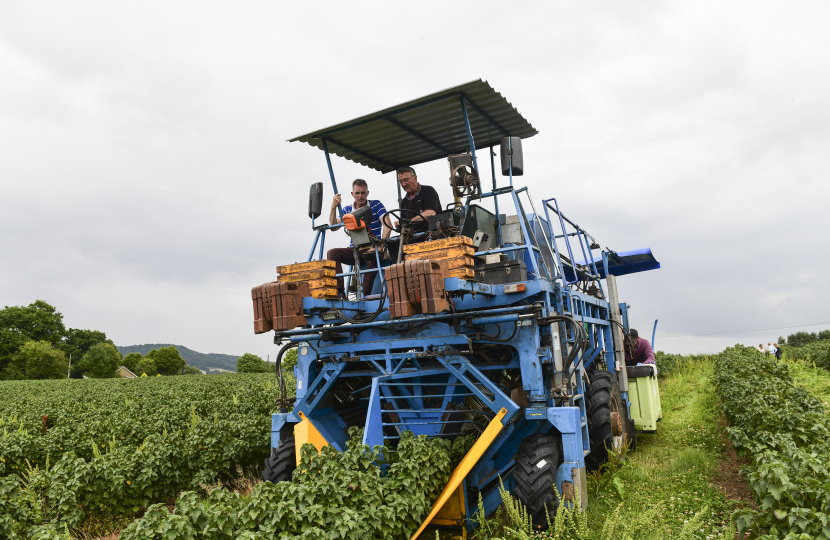 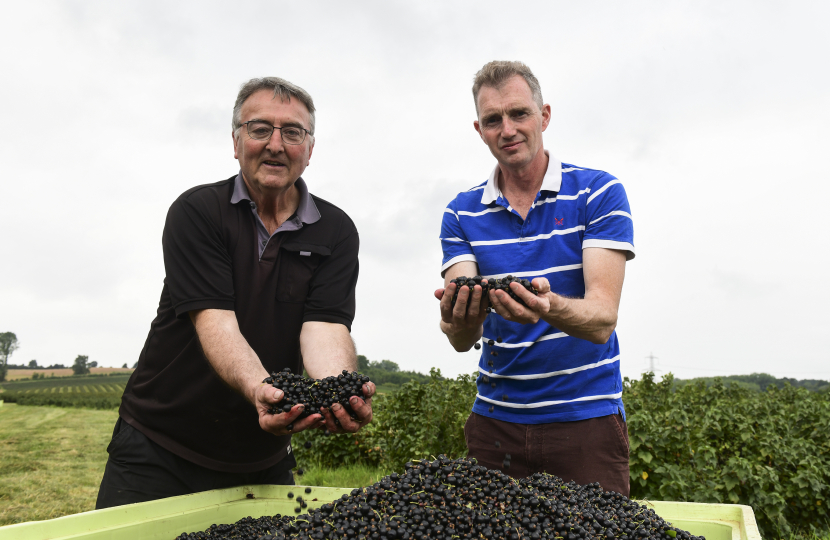 As the annual harvest season gets underway on a Monmouthshire blackcurrant farm, local MP David Davies visited to find out how the much-loved British drink Ribena is made.

With over 90 per cent of all British grown blackcurrants being used to make Ribena, ensuring the long-term viability of the environments they grow in is vital for future harvests.

Even during the busy harvest season, biodiversity and sustainability remains a top priority for the business and its growers across the UK.

Andy Tabb welcomed Mr Davies to McConnel Farms in Crossways, near Monmouth, where he highlighted the importance of protecting wildlife throughout the growing process.

"It is always a special day when we get to show people the work we do on our farm, but to be able to welcome David has been a real highlight," said Mr Tabb.

"Our team has been tirelessly preparing for harvest this year, and we are so grateful for the support we get from SBF GB&I on an ongoing basis.”

Mr Davies added: "Ribena is made using 100 per cent British grown blackcurrants so drinking it is healthy for British farming.

"I have always been a fan and it is great to know that Monmouthshire plays such a big role in supporting this fantastic British drink. Without the hard work and commitment of farmers such as Andy, Ribena would not be the success story it is today.

"It was brilliant to meet the team harvesting the blackcurrants, especially the students. Having worked on a farm myself over 30 years ago, I was certainly impressed with the level of mechanisation used.”

Every year, SBF GB&I works with its growers to implement a bespoke six-point plan for the protection of wildlife and habitats on blackcurrant farms, work alongside independent conservation advisors to produce specific Biodiversity Action Plans and carry out audits as part of its in-house Farm Stewardship Scheme.

Harriet Prosser, agronomist at SBF GB&I, commented: "Harvest is the most important time of the year for us at Suntory Beverage & Food GB&I, but we work all year round to make sure our Ribena growers have the support they need to run their farms as sustainably and efficiently as possible.

"The farm in Monmouthshire run by Andy Tabb is a great example of how responsible farming practices not only protect and even enhance wildlife and habitats, but also ensure that local economies continue to thrive.”

Ribena blackcurrant growers manage over 4,000 acres of British countryside – including Dundee in Scotland, Herefordshire on the Welsh borders, Somerset in the South West, the South East and East Anglia.

Pic cap: David Davies MP met with blackcurrant grower Andy Tabb at McConnel Farms to celebrate the start of harvest and to find out how the makers of Ribena are supporting biodiversity on their farmland.