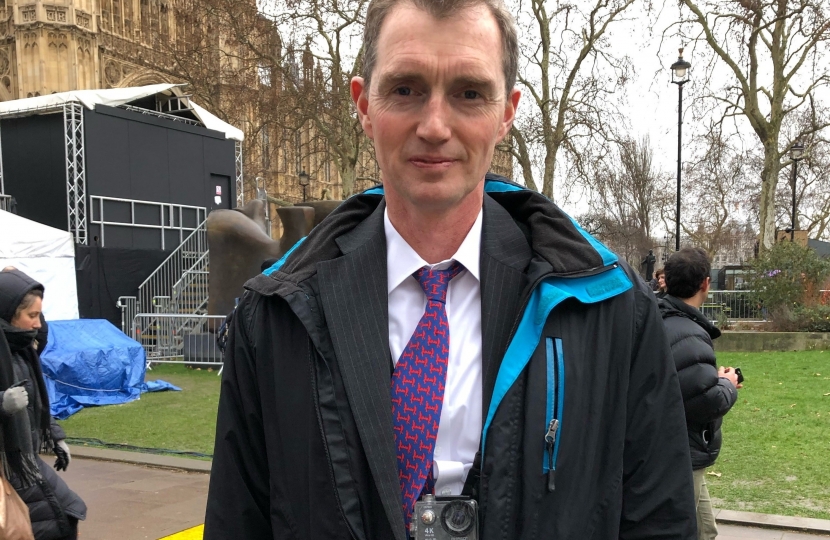 MP David Davies has started wearing a body camera to “collect evidence of abuse” by protestors outside Parliament.

The pro-Brexit Monmouth MP said he had been sworn at and called “scum” and has taken to using the device for protection from “malicious allegations”.

Concern about threats to public order have escalated in recent weeks, with at least 115 MPs calling on the police to improve their response to the increasing levels of abuse aimed at politicians.

It comes after Conservative Remainer Anna Soubry, who supports another Brexit referendum, was drowned out by “Nazi” taunts during a live television interview.

However, Mr Davies said verbal abuse and harassment suffered by politicians on both sides of the Brexit divide has been going on “a long time”.

Describing the behaviour he has experienced while doing interviews on College Green opposite the Houses of Parliament, he said: “Verbal abuse, intimidation and threats have been happening for almost a year now. I have been subjected to them on a regular basis.

“I have had flags pushed into my face, had my way barred by multiple people, been sworn at and called “scum” and been told that “we are going to find where you live and we will be coming for you”.

“Some protestors are deliberately trying to goad people into reacting then showing edited footage. On one occasion after having my way blocked and having a flag on a wooden pole pushed towards my face, I thought I was about to be assaulted and I was then maliciously accused of “squaring up” to the person.

“The camera will ensure that these types of malicious allegations cannot be made. I’ll use it whenever I walk up and down to College Green now.”

Mr Davies, who chairs the Welsh Affairs Committee, defended the right to protest but urged fellow Brexit supporters not to engage in intimidation.

“I would say to anyone who supports Brexit as I do, please do not lower yourself to these levels of behaviour,” he said.

“The abuse of Anna Soubry was outrageous and everyone is right to condemn this but it is a shame that when pro-EU supporters were harassing Brexit-supporting MPs like myself there were no calls for police action.”