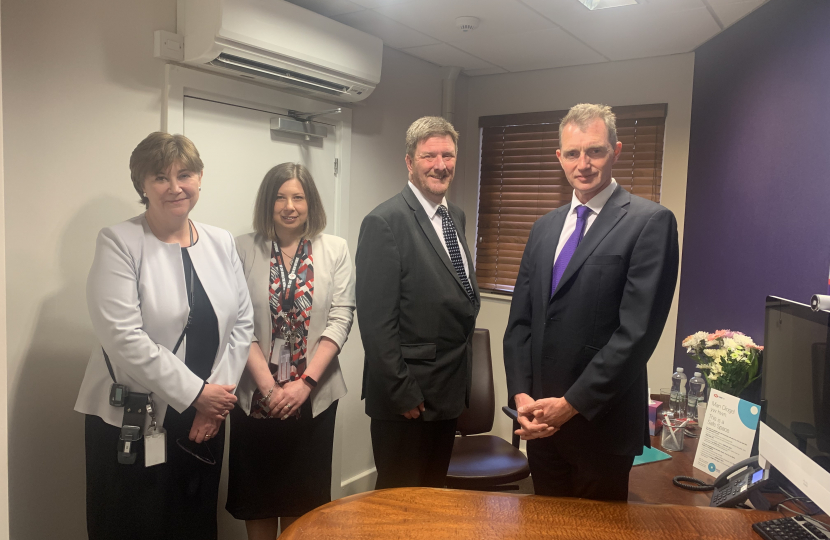 A high street bank is offering domestic abuse victims access to a “safe space” to get specialist support and advice.

One in four women and one in six men will experience domestic abuse in their lifetimes.

During the first 12 months of the Covid-19 pandemic, there were 8,679 cases reported to Gwent Police, making up 18 per cent of all crime reported to the force during that period.

HSBC UK has launched the Safe Spaces initiative in every one of its Welsh branches, including Abergavenny.

It is a partnership with domestic abuse charity Hestia which gives people somewhere to phone a helpline, contact support services or talk to a friend or family member. They can also speak to a trained staff member and call the police if necessary.

The Abergavenny branch on Frogmore Street was visited by Monmouth MP David Davies, who went to find out more about the scheme.

“It’s important to see the work which is being done in the community to help people,” he said.

“High street banks are in a good position to spot signs of abuse and the Safe Spaces scheme will offer those in need a safe haven.

“While a bank may not be the first place someone would think of to turn to, it’s vital to know such services are available.”

Andrew Ferns, local director for Abergavenny at HSBC UK, said he wanted branches to play a significant role in breaking the silence around domestic abuse.

“By providing a Safe Space in the heart of our local community, we can reach victims and ensure they get the specialist help and advice they need,” he added.

People are also able to open a bank account through HSBC’s No Fixed Address scheme, which supports those experiencing housing issues.

Individuals are referred by domestic abuse charity representatives and can use the address of the charity to open the account.