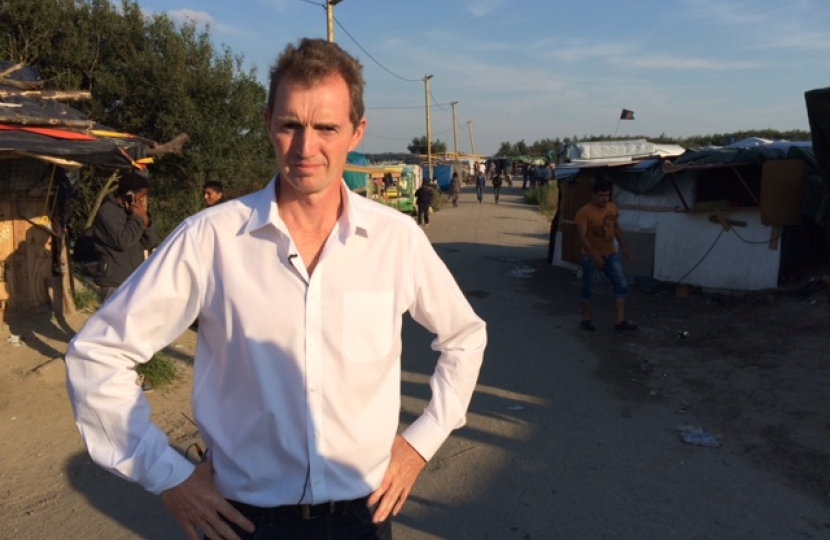 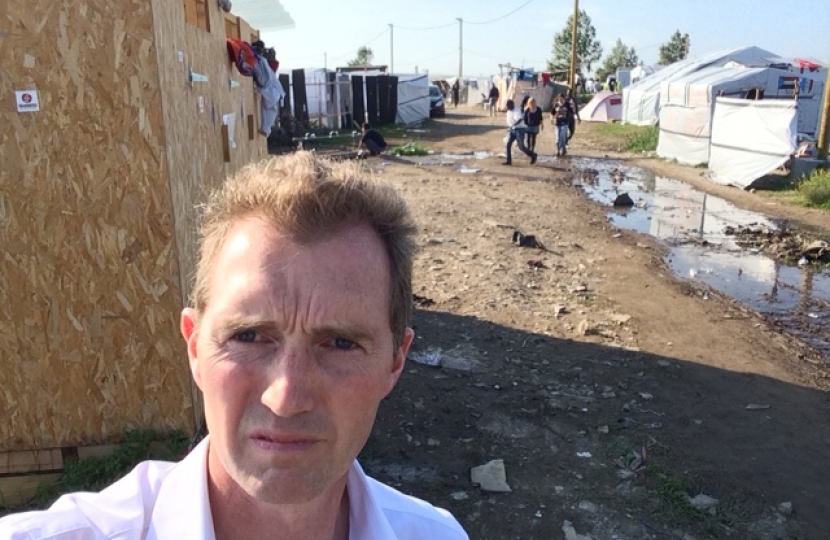 A visit to the migrant camp in Calais has reinforced an MP’s view that the UK needs a proper immigration policy.

Monmouth MP David Davies heard first-hand stories from refugees about how they had arrived in Europe and said living conditions at the camp, known as “the jungle”, were appalling.

He travelled to France last week to help make a documentary for the Welsh language current affairs programme Y Byd ar Bedwar, which will be shown next Tuesday (22 September) at 8:25pm on S4C.

The camp contains thousands of migrants displaced from countries including Syria, Libya and Eritrea who are trying to reach Britain by jumping on passing lorries or cross-Channel trains.

“My position has always been that we cannot simply open the borders and allow in everyone who wishes to come,” said Mr Davies.

“Indeed, my visit to “the jungle” really reinforced to me the importance of a proper immigration policy.

“From what I could see, there were many more people in the camp from Iraq, Pakistan and Sudan than from Syria. The different groups live in separate areas. I was told it is a dangerous place after dark and tensions between these various ethnic groups often erupt into violence.

“Many have paid people traffickers large sums of money to get them to the UK. One man told me on camera that he had paid 17,000 euros. The criminal gangs are making fortunes.”

While Mr Davies expressed sympathy with the migrants’ plight, he said the UK had already spent nearly £1bn financing official refugee camps with full facilities throughout Turkey and other parts of the Middle East.

“The Calais migrants are there because they want to live in the UK as opposed to staying in a safe zone near their home countries, or seeking asylum in any of the dozens of countries they pass through en route,” he said.

“One reason for this, I was told, was because it is easy to find work on the black market in the UK.

“I saw a handful of women and children but I would estimate that the overwhelming majority of people there are young men. I can’t help wondering if they are genuine refugees fleeing war, why they are so willing to leave behind wives, mothers and children.”

Mr Davies also claimed a number of activist groups are present in the camp.

“Some are doing genuine charity work, although I suspect others had more sinister motives,” he said.

“I saw posters offering migrants help on what to say to claim asylum. There was also evidence that outside groups are organising demonstrations.”

In response to the worsening humanitarian crisis, the UK is to provide resettlement to 20,000 Syrian refugees over the next five years.

Prime Minister David Cameron has said the extra refugees would be taken from camps bordering Syria, not from among those already in Europe.

“I think this is a much more sensible approach, enabling us to target the most vulnerable refugees whilst trying to ensure they do not have extremist beliefs,” added Mr Davies.

“I don’t blame anyone individually for wanting to come here but we surely have a responsibility to those already in the UK, especially those waiting for housing or working in low paid jobs, who have competition from people willing to work for very low wages.”

Mr Davies used a handheld GoPro camera to record some footage at the camp, which will be published on YouTube next week.