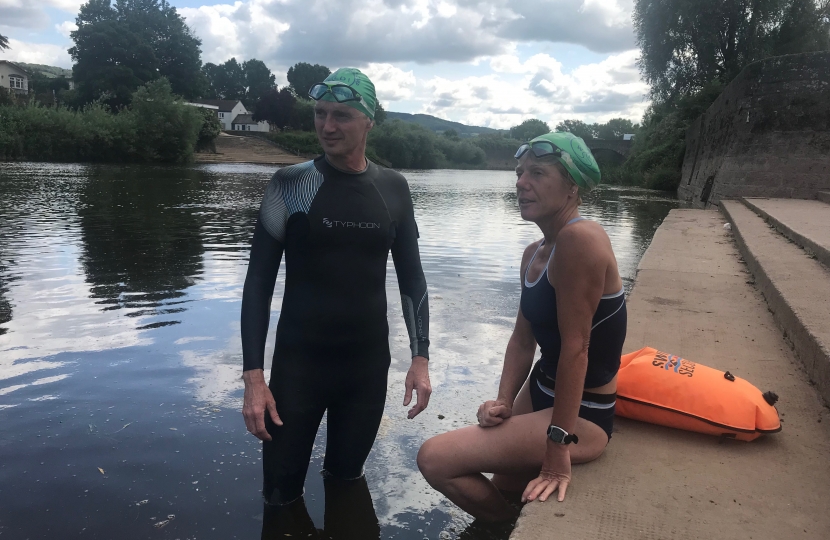 An MP is calling on the Welsh Government to follow England and introduce new legislation to tackle river pollution.

Measures to reduce sewage discharges from storm overflows will be put into law as part of the Environment Bill, which is currently passing through Parliament.

But these key changes will not be extended to protect Welsh waterways as responsibility lies with ministers in the Senedd.

David Davies MP said he remained “deeply concerned” about sewage discharges. The rivers Usk and Wye run through the Monmouth constituency and both have featured in recent documentaries highlighting unacceptable levels of pollution.

“I share concerns being expressed by the local community about an incident of sewage discharging into the River Usk from an Emergency Overflow (EO) for a pumping station serving the main sewage network for Usk town,” said Mr Davies.

“The River Usk is a Site of Special Scientific Interest and a Special Area of Conservation. It is rightly enjoyed by all in the local and wider areas and it is very concerning that this incident has occurred.

“Unfortunately, I have since been made aware of further cases of pollution affecting both the rivers Usk and Wye and have duly reported these to the relevant agencies.”

During wet weather, storm overflows release diluted wastewater into rivers, preventing a combination of sewage and rain from overloading the sewers. However, their use has increased in recent years as water infrastructure has not kept pace with population growth.

The UK Government says reducing the reliance of water companies on storm overflows is important to help cut pollution in waterways, with key legal duties being introduced to tackle high levels of sewage in rivers.

These include placing a duty on water companies to publish storm overflow data.

A Storm Overflows Taskforce has also been set up to bring the UK Government, water industry, regulators and environmental groups together to drive improvements in this area – with a requirement on government to publish a plan by September 2020 to reduce sewage discharges from storm overflows.

Mr Davies added: “It is absolutely vital we protect our waterways and I am delighted the UK Government has committed to tackling the issue of sewage discharging into our rivers.

“I am therefore calling on the Welsh Government to match this commitment and introduce the same legislation to improve water quality in Wales.”

Welsh business hailed for helping lead world out of pandemic

A local business has been hailed for helping lead the world out of the Covid-19 pandemic.

Tri-Wall, with its UK head office based in Monmouth and six sites across Britain, continues to play an important role in the distribution of the vaccination programme.