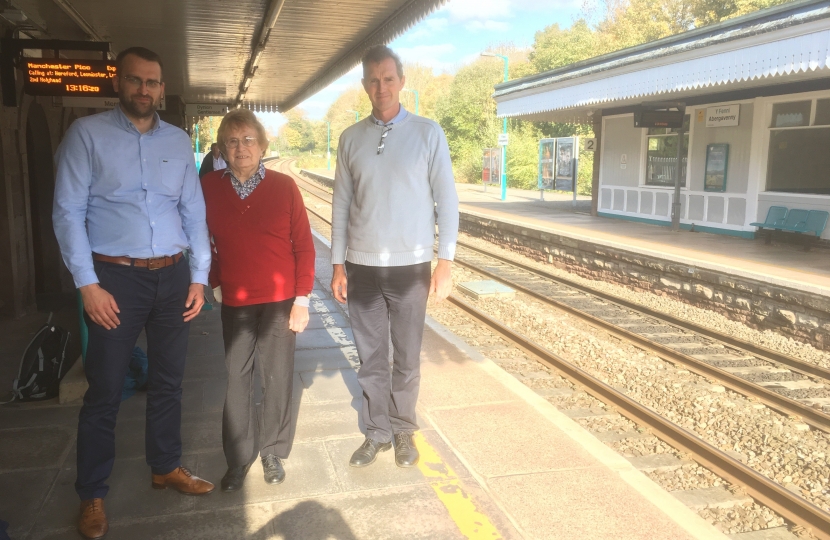 David Davies MP has welcomed the Department for Transport’s announcement that funding will be given to improve disabled access at Abergavenny Railway Station.

The UK Government has today announced that funding for a further 73 railway stations across the UK will benefit from £300 million Access for All funding as part of the latest move towards a fully inclusive transport network.

Monmouth MP David Davies and County Councillor Maureen Powell, who previously met with officials from Network Rail to discuss the lack of disabled provision at Abergavenny, have welcomed the announcement.

“I am delighted that Abergavenny has been included within this scheme, which will not only benefit residents of this area but also the many visitors and commuters travelling through Monmouthshire.

“The current situation is not just unacceptable for anyone who is disabled, it is also very difficult for passengers arriving or leaving with heavy luggage or pushchairs on the downline towards Newport and Cardiff”, said local Councillor Maureen Powell.

“I commend the efforts of Maureen Powell who has campaigned tirelessly on this issue and has achieved this fantastic result for her area”, said local MP David Davies who has met with Councillor Powell at the station on a number of occasions with officials and has supported the application.

UK Transport Minister Nusrat Ghani said: “Everyone should be able to access our rail network and I am pleased to announce that Abergavenny will now become a fully accessible station in the next stage of the Access for All programme.”

The scheme, which was first launched in 2006, has delivered more than 200 accessible routes into selected stations so far.

Following nominations from the rail industry, stations were selected for the scheme based on a range of criteria including footfall, weighted by disability in the area, value for money and local factors such as proximity to a hospital.

The selected stations will, subject to a feasible design being possible, receive an accessible route into the station, as well as to and between every platform. All work at the stations is due to be completed by the end of Spring 2024.