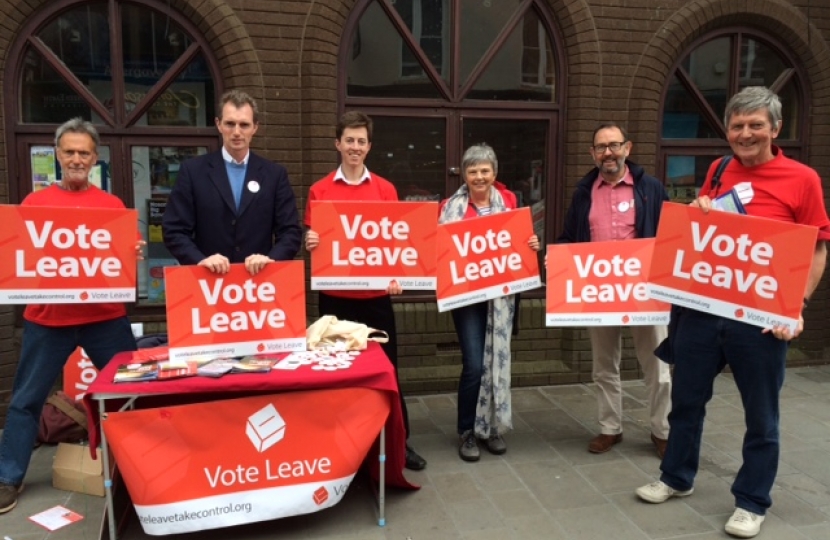 It has been suggested to me that because “Monmouthshire voted for Remain”, I must also support government votes to stay in the European Union.

Although they look similar on a map, there are significant differences in population. For example, the Monmouth parliamentary constituency contains around 10,000 electors from the Torfaen local authority area.

Torfaen voted by a huge margin to leave the EU (59.8 per cent). I could therefore argue that because of this, it’s likely the Monmouth constituency voted to leave. Of course, we will never know for certain and I will not make such a claim.

I do, however, welcome general acceptance of the principle that MPs should vote in a way which reflects the wishes of those who took part in the referendum. While we will not know exactly what happened in Monmouthshire, we do know a majority in both Wales and throughout Britain voted to leave. I hope you will agree MPs must recognise this and follow the wishes of the people. I will certainly be supporting Brexit and the government’s timetable to trigger Article 50.

Following the EU referendum, I have received a large number of emails. Some from people unhappy with the result who want another referendum, and some from people who supported Brexit and believe the government is now trying to "wriggle out" of it - and that I might not follow this through.

I wish to send the same reply to everyone so there can be no doubt where I stand. I would also like to deal with a selection of the specific points raised:

The Monmouthshire local authority area voted by a very narrow margin to Remain. The Monmouth parliamentary constituency has different boundaries and contains thousands of voters in Torfaen, which voted heavily for Brexit. Based on the Torfaen result, there is a strong possibility that there would have been a narrow margin for Brexit in the Monmouth constituency. However, it would have been close and nobody will ever know for sure.

2) The referendum turnout was small and the majority was small

The referendum turnout at 71 per cent was huge, the biggest turnout in an election since 1992. The margin across the UK was around four per cent. To give a comparison, turnout in the Welsh devolution referendum of 1997 was just 50.3 per cent. The margin in favour was less than one per cent, yet nobody questioned the right of the government to go ahead with a Welsh Assembly. I was on the losing side of that campaign but fully accepted the result.

3) People have changed their minds

To judge from the number of emails I have had from those who voted for Brexit, far from changing their minds people are absolutely furious at the suggestion that the referendum should be run again.

4) The Brexit campaign was "based on lies"

I do not accept this at all. I appeared on numerous TV and radio programmes to discuss the campaign. I also conducted a major TV debate and dealt with questions on all of the claims being made by both sides. In contrast, the Remain campaign made numerous claims designed to scare people into voting to stay in the EU.

5) The campaign was unfair

Yes, the campaign was certainly unfair. The government used absolutely every device it could to win. The civil service was used to proclaim the Leave message, Brexit-supporting ministers were unable to access important information during the campaign, parliamentary questions which might have undermined Leave claims were not answered, local authorities made it difficult for Leave campaigners to set up stands whilst allowing Remain campaigners to do so, millions of pounds of taxpayers’ money was spent on propaganda - the list goes on and on. For the government to still have lost under these circumstances shows how strongly the public feel about this issue.

6) Those voting Leave were uneducated/old and should be ignored

A number of people have made offensive suggestions similar to the above. Essentially there is a body of people out there who seem to think that the opinions of those who are working class or over the age of 35 are unimportant and should be ignored. Please may I make it absolutely clear that I utterly reject this view. In a democracy, every opinion and every vote is valid and all are equally important. This is a fundamental issue for me and I will never forget it.

I made it clear after the result, and will do so again, that although the Leave campaign won, it is important to reassure those who voted Remain. We need to respect those on both sides of the campaign but I have no intention of ignoring the result. I do believe that all sides must now change the tone of the debate. Remain campaigners need to accept the result and work to have their voices heard as we move forward, rather than trying to wreck a democratic choice. Leave campaigners need to understand that MPs like myself will want to offer reassurances to those who have genuine concerns about the path we are on.