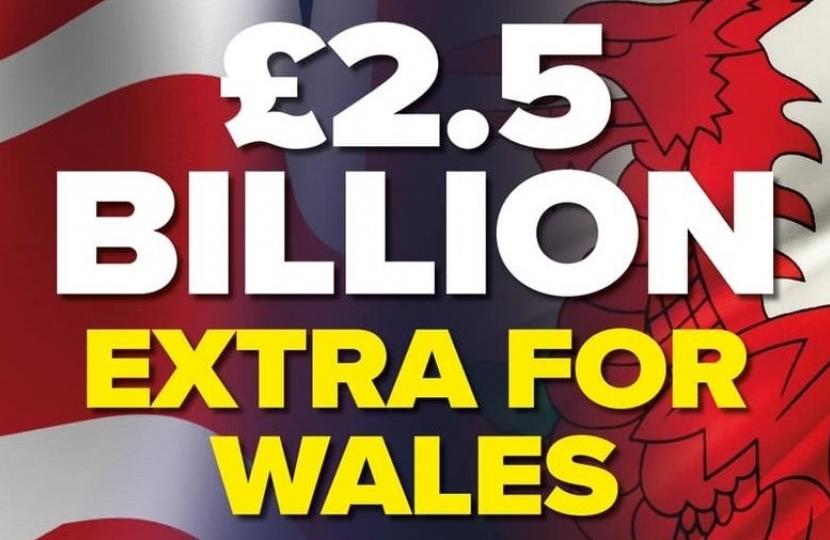 Chancellor Rishi Sunak has delivered the largest annual funding settlement for Wales since the start of devolution over 20 years ago. As part of significant spending plans announced during the Autumn Budget, UK Government will provide a record £18bn per year to Wales through the Barnett Formula – representing a 2.6 per cent rise in the Welsh Government’s budget. This includes an additional £2.5bn per year, meaning Welsh Government will now receive around £120 per person for every £100 per person of equivalent UK Government spending in England. Ministers in Cardiff Bay are well-funded to deliver all their devolved responsibilities and have been given the tools to get on with the job of kickstarting the Welsh economy as we continue to recover from the Covid-19 pandemic. It will be interesting to see if the money is put to good use to tackle the NHS crisis, invest in social care and education, and sort out the cleanliness of our rivers.

Wales will benefit from many UK-wide measures too including freezes to fuel and alcohol duty, the increase in the minimum wage for thousands of workers and reducing the Universal Credit taper rate. Within Wales, we are also beginning the process of replacing EU funding with other schemes through the UK Shared Prosperity Fund and there will be a further announcement on this shortly.

There was a welcome boost for shops, restaurants, bars and gyms in England with a temporary 50 per cut in business rates, up to a maximum of £110,000. In addition, the Chancellor has scrapped 2022’s planned annual increase in rates for all firms for the second year in a row. However, the Treasury only decides business rates in England – it allocates funding to the devolved nations so they can follow suit but has no say on how this money is spent. It is therefore up to Welsh Government to decide it if wants to mirror these changes or, alternatively, keep current business rates in Wales and use the money elsewhere. I will be pressing First Minister Mark Drakeford to match UK Budget measures to help our beleaguered hospitality, leisure and retail sectors deal with the economic fallout from coronavirus. On too many occasions in the past, we have seen money given to Welsh Government which is not passed on in the way expected. Business bodies are asking for an urgent statement detailing what will happen in Wales. There should be no debate about it; we need action and a full commitment that Wales will match the business rates relief offered in England.