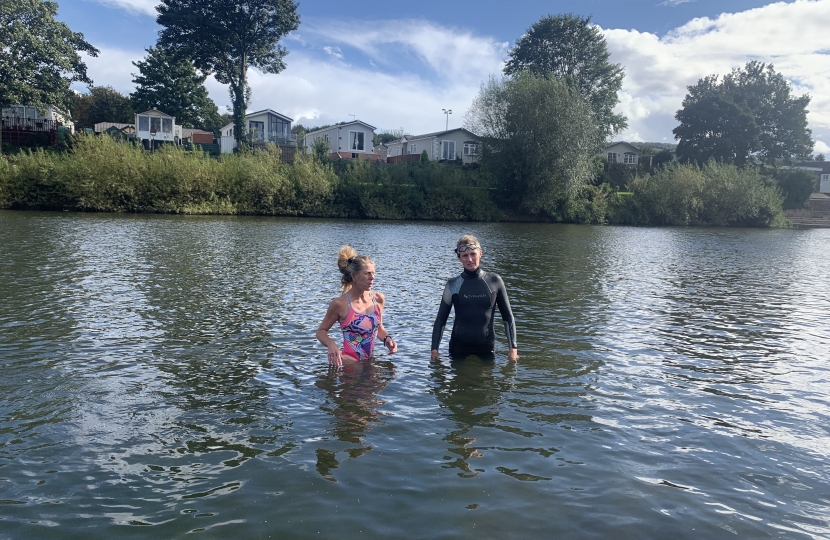 I was pleased to accept an invitation from environmental campaigner Angela Jones to swim in the River Wye at Monmouth. I am an all-year-round sea swimmer and like many others worry about the cleanliness of the river water flowing into it. Angela previously took me out for a swim in July 2019. I do not claim to be an expert but to me the river appears to have declined since then with less vegetation and fewer swans to be seen. I have discussed the matter with Natural Resources Wales (NRW), the body responsible for maintaining environmental standards. NRW accept that there is a problem but believe that quality has not gone down over the last 5 years. They have backed this up with a report. NRW are answerable to the Welsh Government not the UK Government but they have agreed to meet with myself and a few interested parties including Angela to explain their thinking. Although the Welsh Government are responsible for river cleanliness in Wales, I will be use my role as an MP to try and get NRW, Welsh Government and Welsh Water to improve standards and I will certainly be reporting back on the meeting which will take place shortly.

Wider environmental issues are going to be much in the news this month with the COP26 conference taking place in Scotland. This is an international meeting to discuss global action on climate change. There is a consensus that mankind is having an impact on the climate through emissions of CO2 and other gases. The solutions to overcome this are available but will only work if all the major emitters agree to cut emissions. There is no hiding the fact that going carbon neutral will be costly so there will need to be widespread public support for the measures necessary to do this. I believe that public support is being undermined by the actions of an irresponsible minority of environmentalists who are protesting by blocking roads to make their point. Stopping people from getting to work, from dropping off their children to school, or from visiting ill or dying relatives in hospital is a quick way to anger the public and to undermine support for a cause just as most people were coming around to it. I fully support the Government in bringing in new laws to deal with this selfish minority.