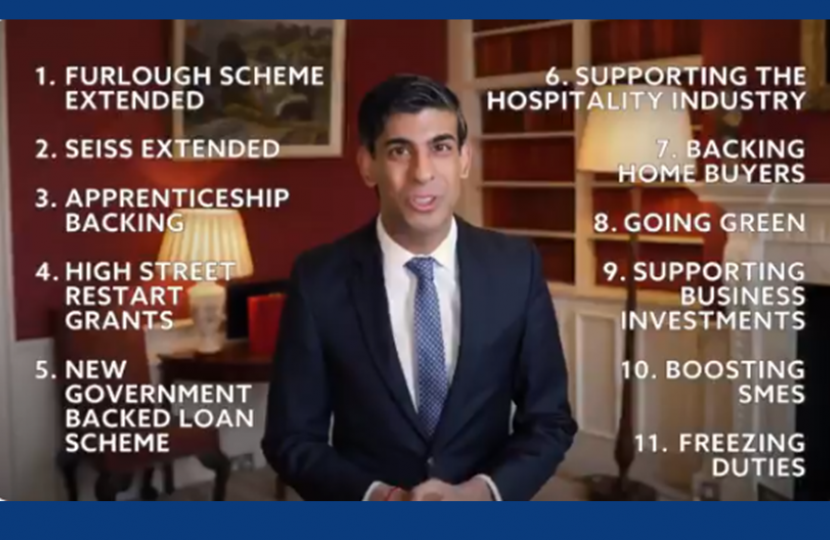 Last week’s Budget set out the UK Government’s continued pledge to support jobs and individuals through the coronavirus pandemic. Furlough will be extended until the end of September, as will support for the self-employed. Businesses can continue to access loans and those on Universal Credit will receive the £20 weekly uplift for another six months. However, Chancellor Rishi Sunak was honest about the enormous costs to the economy of Covid. Hundreds of billions of pounds have been borrowed and spent on everything from the vaccination programme to supporting millions of people who have been unable to work. We cannot simply keep borrowing money and Rishi was quite upfront about the fact taxes will have to go up. Large companies making profits will see an increase in corporation tax and freezing income tax thresholds will mean most of us will end up paying more. There is no point in hiding this.

As a Conservative, I prefer taxes to be low. But I also understand a nation cannot simply live on borrowed money. In my view, it is perfectly logical to believe we should continue to maintain record funding of the NHS, the multi-billion support package for business and extra help for those out of work by raising taxes. There is a logical view (with which I strongly disagree) that we could ditch all extra support and keep taxes low. What would be completely illogical and incoherent would be to continue to ask for support measures, or even to demand more money is spent, and at the same time opposing the tax rises to pay for it. I will certainly be happy to vote for Rishi’s Budget this week and I look forward to hearing the arguments of those who vote against.

The Budget also delivered some great news for Wales. There was an extra £790m for the Welsh Government. Another £800m will be divided between Wales, Scotland and Northern Ireland for the Levelling Up Fund, which will deliver infrastructure and other projects. There was funding to put together schemes for the Shared Prosperity Fund, which will replace the EU Structural Funds that are being phased out over the next three years. There were also millions for a hi-tech rail testing facility in South Wales and a centre for producing green hydrogen in North Wales.

The success of the vaccine programme heralds a return of normality. As we contemplate this in the Spring weather, I am minded of the Welsh saying “Daw eto haul ar fryn” - literally the Sun is coming over the hill, but meaning things are getting better.