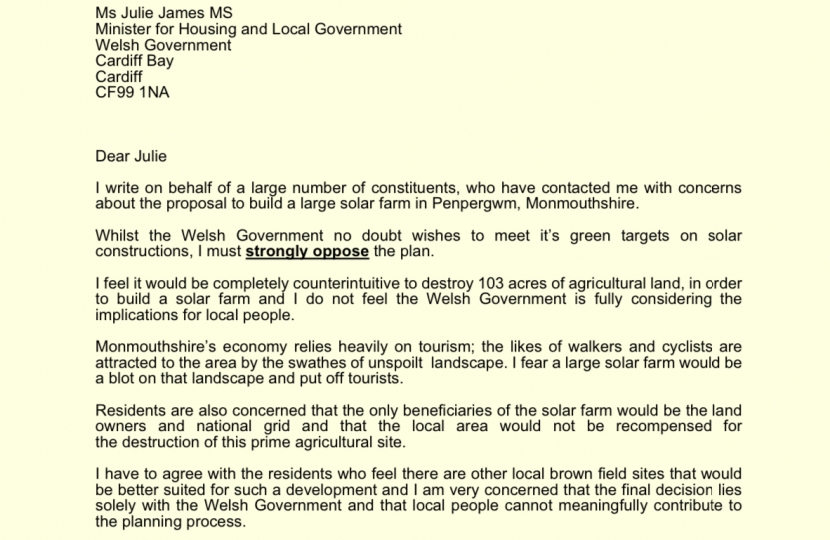 Opposition is growing to plans for a solar farm covering more than 100 acres of unspoilt Monmouthshire countryside. The proposed farm on 11 agricultural fields in Penpergwm, south-west of Abergavenny, would generate up to 45 megawatts of electricity. But concerns are mounting. Due to its size and prominence as a “Development of National Significance”, the application will be determined by the Welsh Government’s Planning Inspectorate - not Monmouthshire County Council. And while ministers in Cardiff Bay no doubt wish to meet their green targets on solar constructions, I fear full consideration may not be given to the local implications of such a largescale development. Monmouthshire’s economy relies heavily on tourism; the likes of walkers and cyclists are attracted here by swathes of visually attractive farmed landscapes. Destroying 42 hectares (103 aces) of prime agricultural land seems completely counterintuitive and questions are understandably being asked as to how the local area will benefit. I have to agree with residents who have suggested there are other local brownfield sites that would be better suited to build a solar farm and I cannot see how they are meaningfully expected to contribute to the planning process when the final decision rests solely with the Welsh Government. I am therefore strongly opposed to this project and have written a letter of objection to Planning Minister Julie James.

Word has reached me of the praiseworthy actions of Monmouth postman Adrian Swain, who went above and beyond after a local gentleman suffered a nasty fall in The Narth village. Mr Swain found the gentleman in the road and called an ambulance, staying with him in torrential rain for two hours. He informed other residents of what happened and I am pleased to say they managed to get the gentleman back home safely. I’m told this episode could have ended much worse but for the help of Mr Swain and I have been asked by villagers to express their sincere appreciation for his exemplarily service to the community. Having spoken with Royal Mail, I understand arrangements are being made to properly recognise and thank Mr Swain for his good deed.

Every single one of us would want to offer our thanks to those involved in rolling out the coronavirus vaccine. Over 12 million people have now received their first dose across the UK and cases are falling. However, with Senedd (Welsh Parliament) elections a few months away, I think many will be uncomfortable to see one political party is asking for people's names and addresses in order to allow them to "send a message" to NHS vaccinators. The NHS does not belong to any political party. It belongs to us all. I would happily send my thanks to NHS vaccinators. But I wish to remind the political party responsible for this advert that if we had listened to their advice and stayed in the European Medicines Agency, then there would be hardly any vaccinations taking place!