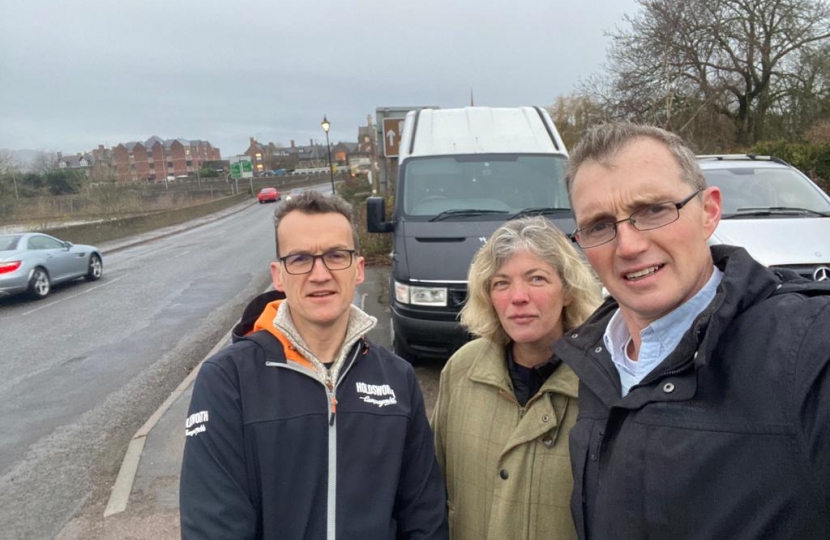 The Welsh Government has been urged to fund improvements on a Grade II-listed bridge into Monmouth as concerns grow over pedestrian safety.

The bridge carries the A466 the 71 metres over the Wye to meet the A40 at Monmouth.

It is a popular and convenient shortcut for lorries coming to and from the Forest of Dean. But due to the width of the bridge, large HGVs struggle to manoeuvre around the bends in the road and need to enter the opposite carriageway or mount the narrow pavement.

Local MP David Davies said he had been contacted by residents reporting numerous incidents of “close shaves” where pedestrians have nearly been hit by wing mirrors and vehicles mounting the pavement.

He believes it’s only a matter of time before there is a serious accident.

“Walking over the Wye Bridge is a frightening experience no matter what time of day,” said Mr Davies.

“A large number of school pupils use the bridge and I echo concerns expressed by both the principal of Haberdashers’ Monmouth Schools and worried parents about how dangerous it is.

“Continual heavy traffic and congestion also means you have daily pollution from trucks and cars, which is unpleasant.”

Various proposals have been mooted over the years to improve safety and reduce traffic delays. In 2018, Monmouthshire County Council received Welsh Government funding for design and contract preparation for the A40 Wye Bridge Transpiration Scheme.

There were plans to widen the A40 southbound approach and create a dedicated left-turn lane for traffic using the A466 Wye Bridge.

The scheme also included a proposal to remove the pavement on the south side of the bridge so a widened pavement could be created on the north side without having to decease the width of the road itself.

A third proposal has since been brought forward to build a new active travel bridge for pedestrians and cyclists further upstream between Wyesham and Monmouth.

Mr Davies has written to Economy Minister Vaughan Gething asking for clarification on which schemes, if any, the Welsh Government intends to support.