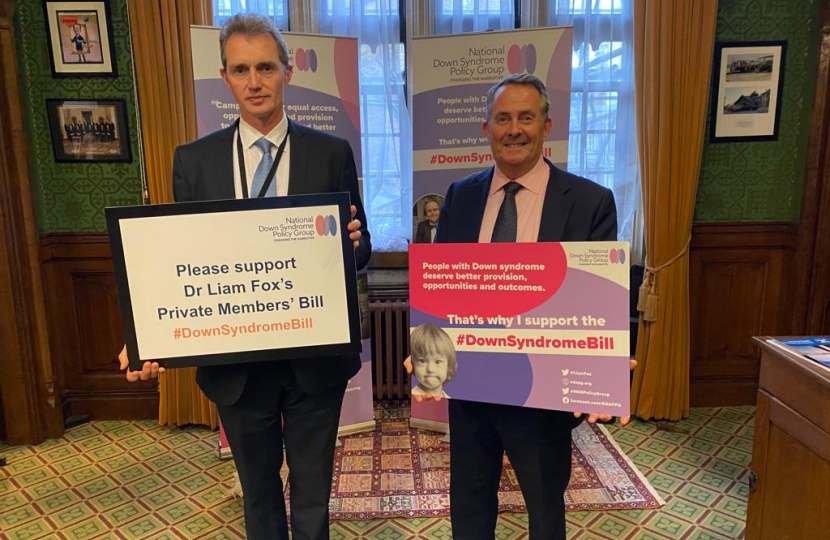 The Welsh Government has been urged to follow plans being drawn up in England which will require local authorities to look after the needs of people with Down syndrome.

Dr Fox said the prospective Down Syndrome Act 2022, as it will become known in law, would be the first legislation of its kind in the UK and internationally.

There are around 47,000 people with Down syndrome in the UK and many face significant challenges throughout all stages of their life.

This important bill – backed by the National Down Syndrome Policy Group - aims to place a duty on local authorities in England to assess the likely social care needs of people with Down syndrome and plan provision to help support them.

Monmouth MP David Davies, who will be voting for the bill, said he hoped the Welsh Government would follow suit by introducing similar legislation in Wales.

“I am delighted to be supporting the Down Syndrome Bill,” he said.

“Although health and education are devolved in Wales, this first-of-its-kind legislation will undoubtedly drive change in all parts of the UK by putting people with Down syndrome and their families at the heart of decisions, rather than leaving them as bystanders.

“For the first time, people with Down syndrome are beginning to outlive their parents. If we do not make provisions for this then there will be tragic consequences in social care.

“Not only do we have an opportunity to address this situation, but we can go much further by ensuring those with Down syndrome can access the same services as everyone.

“I very much hope the Welsh Government will want to follow best practice set by the UK Government and I have written to Eluned Morgan MS, Minister for Health and Social Services.”

The Down Syndrome Bill will require the Secretary of State to publish guidance to public bodies in England to ensure they are clear on how they should meet the needs of people with Down syndrome.

It will set out best practice across health, education, social care and housing, giving practical advice on how the appropriate steps can be taken to meet the needs of those with Down syndrome when planning, designing and delivering services.

The UK Government will consult widely on the proposed guidance, ensuring the voices of those with Down syndrome, their families and carers are heard, and that the guidance is fit for purpose.