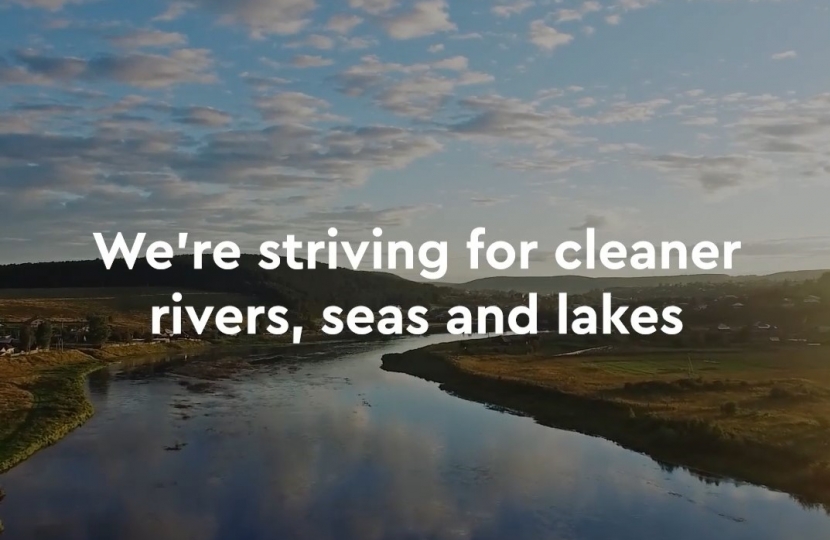 A Welsh MP has urged the Welsh Government and Natural Resources Wales (NRW) to act on the scandal of river pollution after a package of measures to help clean up the environment in England cleared another legislative hurdle in Parliament.

The UK Government’s Environment Bill will task the Environment Agency and water companies to cut the amount of raw sewage being discharged into rivers in England.

But responsibility for river quality in Wales rests with the Welsh Government and NRW - as they are devolved matters overseen by the Senedd – where a decision on tackling the problem here has yet to be made.

The new measures stopped short of an outright ban on waste going into rivers because the sewage network is Victorian, whereby surface water and foul water run through the same pipes and at peak times struggle to cope with the volume of water.

Had MPs supported an amendment for an outright ban on any discharge into the river system, there was a real danger that at times of extraordinary pressure, raw sewage could end up flooding back into people’s homes.

Monmouth MP David Davies said it would have been “grossly irresponsible” to vote for this.

“However, it’s wrong for others to present this as a simple vote in favour of discharging foul waste into the rivers,” he added.

“I fully understand the concerns everyone has about sewage flowing into rivers. I am an open water swimmer myself, as are my children, so I have a personal interest in this matter. But the fact is we have an antiquated sewer network, which is in desperate need of investment.”

The historical background is that the current sewage and drainage system was built in Victorian times. Waste water from rain is channelled into the system alongside waste water and sewage from households and businesses.

This runs into plants and is purified before flowing back into the river system. When there is heavy rainfall, too much water enters the system and pressure builds. If the pressure reaches a certain level, this mixture of rain water and sewage would simply flow back up the pipes and flood people’s houses.

“Obviously, this cannot be allowed to happen. So before that stage is reached, the water companies ease the pressure by releasing untreated waste directly into the river system,” said Mr Davies.

“Sewage will be diluted because this only happens when there is heavy rainfall. However, it is still unacceptable.

“This has been the case for decades. But in recent years, sewage discharge into the river system has increased because we have a growing population and extreme weather has put extra pressure on the sewage system.

“The UK Government has quite rightly decided to address this issue in England. But it has no say over what happens in Wales.”

Under a plan to reduce sewage discharges, the Environment Agency and water companies based in England will report regularly on discharges.

Water companies in England will have to monitor storm overflows and publish notification of the overflow occurring and ceasing within one hour of operation.

They will also be required to monitor the water quality upstream and downstream of the discharge.

A report will be published by 1 September 2022 setting out the actions required to achieve elimination of sewage discharge and the cost and benefits of doing so.

“Completely resolving the problem of sewage discharges would require rebuilding the sewage system. I have heard ministers suggesting this could cost between £150bn and £600bn and take many years,” said Mr Davies.

“By comparison, the UK Government spends around £160bn on the NHS in England every year. Obviously, once we have the figures and the costs and benefits, further measures can be taken.”

In Wales, sewage management and discharge are carried out by Dŵr Cymru Welsh Water; a not-for-profit company answerable to the Senedd.

Water quality monitoring comes under the remit of NRW, which is also funded by and answerable to the Senedd.

At present, it is not clear whether the Welsh Government intends to follow the measures put in place for England.

Monmouth MS Peter Fox said: “I completely understand the level of concern people are airing of sewage entering the river systems across Wales.

“I recently raised this pressing situation directly with the minister in the Senedd, where I feel there’s been a lack of action.

“It’s crucial to put on record that areas - including sewage systems and rivers - coming under the environment portfolio are in fact devolved, meaning they’re the sole responsibility of the Welsh Labour Government.

“We’ve seen decisive action from the UK Conservative Government and need to see the same from Welsh Labour to ensure Wales doesn’t fall behind again.

“It is disappointing that a number of Labour activists in Wales have taken to social media and used emotive language to suggest Conservative MPs “voted to pump raw sewage into the rivers”.

“It would be just as accurate, or inaccurate, for me to put out messages stating, “Labour MPs have just voted to pump raw sewage into your house”.

“Activists in Wales now need to focus their demands at Welsh Labour officials instead, who are ultimately behind the steering wheel.

“The quality of our environment is precious so it’s vital Welsh Water and NRW - which was set up by Welsh Labour - step up to the plate to prevent a serious situation from escalating.”