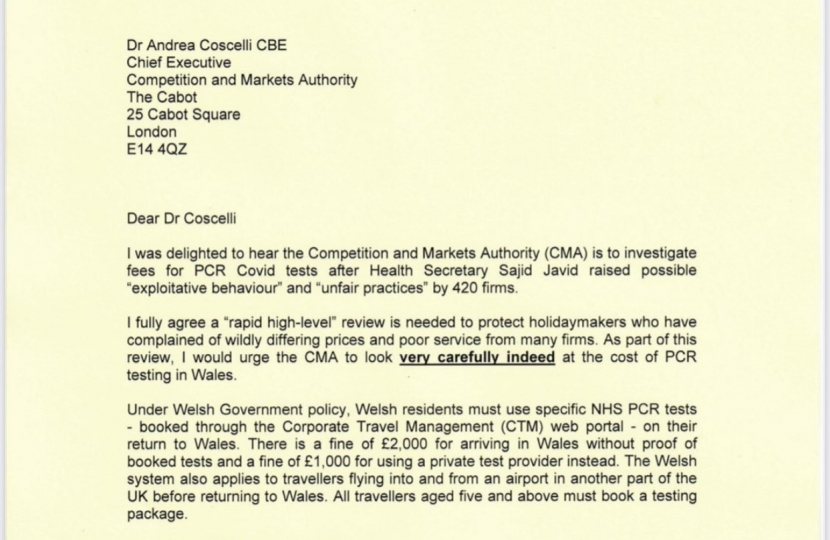 The competition watchdog has been asked to look at fees for PRC Covid tests in Wales as part of an investigation into “excessive” pricing and “exploitative practices”.

In a letter to the Competition and Markets Authority (CMA), Health Secretary Sajid Javid it was time for a "rapid high-level" review to protect consumers.

Holidaymakers in England have complained of wildly differing prices and poor service from many of the 400-plus firms offering PCR Covid tests.

Now Monmouth MP David Davies has written urging the CMA to “look very carefully indeed” at the cost of PCR testing in Wales.

Under Welsh Government policy, Welsh residents must use specific NHS PCR tests - booked through the Corporate Travel Management (CTM) web portal – on their return to Wales. There is a fine of £2,000 for arriving without proof of booked tests and a fine of £1,000 for using a private test provider instead.

The Welsh system also applies to travellers flying into and from an airport in another part of the UK before returning to Wales. All travellers aged five and above must book a testing package.

Costs for NHS PCR Tests in Wales are:

But in England, people can shop around and pay less than £50 per test.

Mr Davies said: “The Welsh Government’s argument for using NHS Wales Test, Trace, Protect tests rather than private tests is because they are processed through the UK Lighthouse laboratories network and results are sent directly into NHS Wales’ systems.

“This apparently helps identify any harmful variants and makes contact tracing easier. However, it strikes me as being nothing more than a monopoly.”

When quizzed in the Senedd, First Minister Mark Drakeford said he had no plans to change the policy and the Welsh Government continues to advise against international travel.

Mr Davies said he had received numerous complaints about the level of service from CTM, including problems with incomplete test kits and delays of four days for results.

He added: “The question understandably being asked by aggrieved constituents is why there is such a big difference in cost compared to other private test providers – and why the Welsh Government is refusing to offer multiple options and prices similar to England.

“UK citizens living in Wales have no choice other than to solely use CTM and are being “ripped-off” as a result. I certainly feel the Welsh Government needs to be questioned on how the contract with CTM was negotiated.

“With the vaccination programme going from strength to strength, if people want to go abroad – and they feel it is right for them to do so – then the Welsh Government should ensure an affordable, accurate and equitable testing process is in place.”