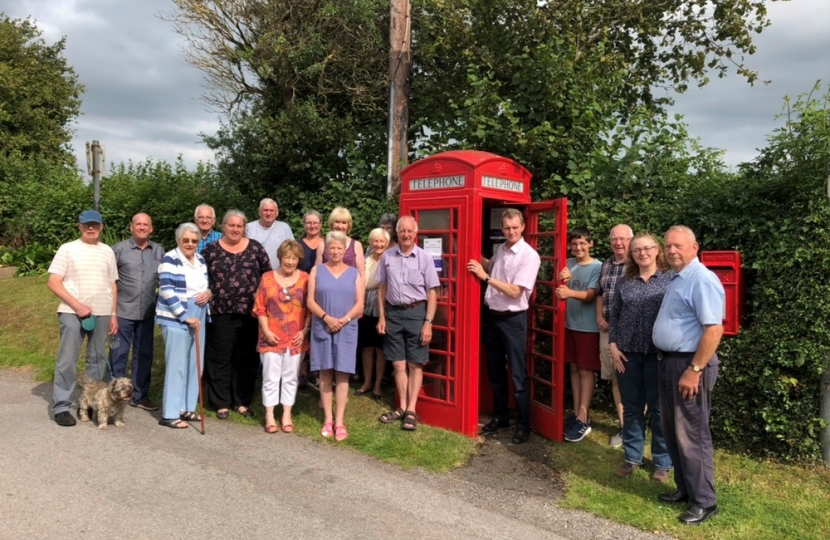 A community campaign to save the iconic red telephone box at Bryn-y-Gwenin from being removed is gaining momentum.

The payphone kiosk at the entrance to the village, near Abergavenny, has been earmarked for removal by BT as part of a nationwide programme to scrap thousands of underused boxes.

It’s the second time the telecoms giant has tried to decommission the box on Bryn-y-Gwenin Lane but residents successfully fought off the original plans in 2016.

Now they have joined forces again and are being backed by Monmouth MP David Davies.

“Mobile signal in this part of rural Monmouthshire is intermittent and very poor at best, so the public telephone box is an essential village amenity for Bryn-y-Gwenin,” said Mr Davies.

“It also serves Llanddewi Skirrid and the surrounding area. With the Skirrid mountain a popular spot for walkers and cyclists, the significance of the box is paramount in an emergency.

“BT claims the phone box has had very little use over a significant period of time. Calls may well be small in number but one day that call could be very important and potentially life-saving.”

A landmark in Bryn-y-Gwenin since World War II, the historic K6 box was designed to commemorate the silver jubilee of King George V and went into production in 1936.

It was originally connected to the village Post Office via a shared line – also known as a party line – and played a small but vital role during the war effort as the main point of contact for local air raid warnings.

“One of our villagers, Richard Cox, cleans it on a weekly basis and repaints it when necessary, which is a real credit to him,” he said.

“The box has always been a proud landmark at the entrance to our village. It is an iconic part of British heritage yet sadly, these red telephone boxes are getting more and more scarce in the countryside.

“It has been stated in the past that if the phone itself was removed but the box remained then the villagers would be prepared to have a defibrillator installed as it would be a very strategic place for one to be available.”

BT has launched a consultation, although the length of time is in dispute.

Mr Davies added: “There appears to be a consultation period of 42 days according to a notice dated 31 July. However, residents tell me it was only actually posted on the box on 5 August.

“It was suggested that BT would notify Monmouthshire County Council of a 90 day period of consultation but I am given to understand the planning department has not received such a notification.

“I will certainly be querying this with BT.”