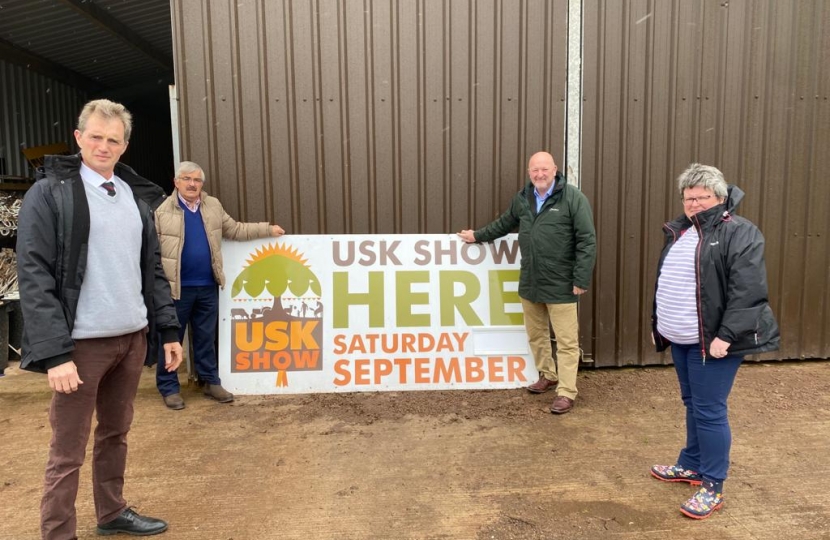 Organisers of one of the biggest one-day agricultural shows in Wales claim they are being left in the dark over whether this year’s event will go ahead as planned due to a lack of guidance from the Welsh Government.

Traditionally held on the second Saturday in September since 1844, Usk Show celebrates the very best of Monmouthshire farming and rural life.

Last year’s event was cancelled after falling victim to the Covid-19 pandemic. While officers of Usk Farmers’ Club Ltd are “cautiously optimistic” of staging a “near normal” show on 11 September, the Welsh Government has so far produced no guidelines for agricultural events.

Nia Osborne, Usk Show event manager, said: “As far as I am aware, we are the only agricultural show in Wales aiming to go ahead in 2021 – partly because we are so late in the showing calendar.

“Many events have already cancelled due to the uncertainty and until we get further guidance from the Welsh Government, we are working a little blind at the moment.

“Agricultural shows are an important part of our culture. A year without them has had a massive impact on not only the farming community, but the community as a whole. Local charities have not been able to attend events to raise funds in normal ways and many small traders rely on the shows for their income.

“There is also the social aspect. Farming can be a very solitary life and these shows are a lifeline for many people. Usk Show is the largest one-day agricultural show in the area and we want to put on a Covid-safe event in September as a thank you to the community and our members that have supported us during the last year, as well as giving them something to look forward to.”

A series of pilot events hosting live spectators are underway in both England and Wales, including sporting matches and festivals, with the aim of getting big crowds back this summer.

Rough dates and guidance have also been given to agricultural show organisers in England to enable them to start planning. But the Welsh Government has yet to follow suit.

“Many of my fellow show organisers in England are off and running for their events, so we really need some urgent clarity to be able to move forward and be in line with our neighbours across the border,” added Mrs Osborne.

They met with organisers who shared their “deep reservations” of being kept in the dark regarding whether the show can go ahead and what potential restrictions, if any, may be needed.

“As soon as the election was over, the Welsh Government started demanding extra powers. But it seems they are not very efficient at using the ones they already have,” said Mr Davies.

“Agriculture is the lifeblood of our rural economy in Monmouthshire yet show organisers cannot plan ahead because they don’t know what the rules are.

“Usk Show injects an enormous amount of money in the local economy and we desperately need it to happen this year. Substantial efforts go into putting on large events like this. It is therefore only right that organisers are made aware of any Covid-19 safety measures which may be needed to allow the event to go ahead and are given sufficient time to implement them.”

Mr Fox added: “As a farmer myself, I know the huge significance agricultural shows play to promote rural life and for that reason the lack of clarity being accorded by the Welsh Government is simply unacceptable.

“I will be writing swiftly to Economy Minister Vaughan Gething urging him to waste no further time in publishing the much-needed guidance for Usk Show and other related agricultural events.”