Too many rural communities still waiting for superfast broadband 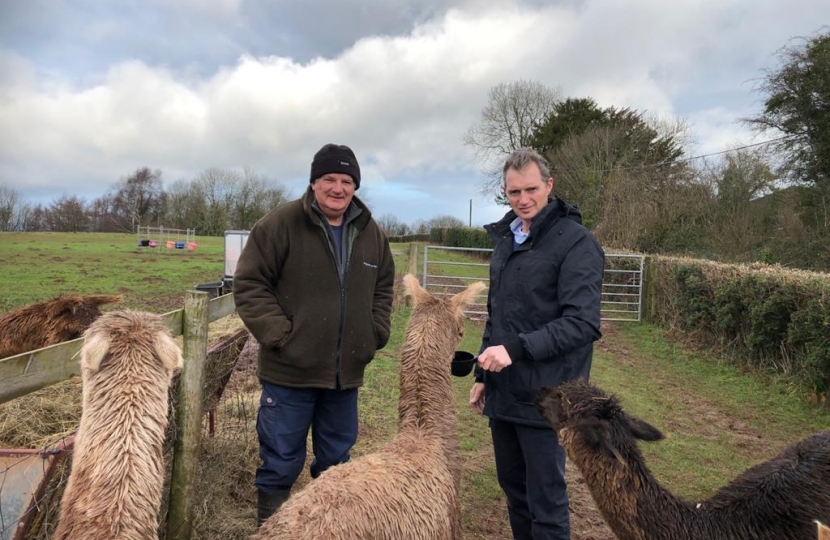 A historic lack of investment and chronic connectivity problems mean too many rural communities are still being blighted by issues such as slow broadband and lack of mobile signal, an MP has warned,

Many of Monmouthshire’s remote rural locations are often last on the list for infrastructure upgrades, largely due to the economic challenges inherent with building expensive new networks to cater for so few properties spread out over a wide area.

Monmouth MP David Davies said there is a “lot of emphasis” on connecting the mostly rural final five per cent of homes and businesses in Wales without a fixed superfast broadband service – a priority the Welsh Government should be “pushing hard”.

Mr Davies was speaking after visiting Peter and Glenda Stoneman on their Amazing Alpacas farm in Earlswood, near Chepstow. They have been breeding and selling alpacas since 2004.

“The only kind of fibre you can find in Earlswood comes from the wool of these friendly South American animals and unfortunately it is no good for delivering the reliable broadband speeds which rural business need in today’s digital age,” said Mr Davies.

As HMRC continues the roll out of making tax digital alongside PAYE Online for employers, Mr Stoneman described trying to run a business with inadequate and old-fashioned copper wire broadband as “very challenging”.

“We are still receiving only a basic broadband connection here with speeds around 2Mbps. In recent weeks, the service we get from BT falls away completely several times a day,” he said.

“Big promises have been made over the past couple of years about sorting out the remaining five per cent of us not getting superfast broadband. We are now in 2020 with no improvement.”

The challenges facing residents in Earlswood are two-fold, Mr Stoneman said, because there is virtually no mobile phone signal either.

“We have looked into alternatives, but the topography of the area makes it difficult to find anything that works,” he added.

“Service providers are spending their money in urban towns and cities where the population is far greater. We are a handful of houses in a small rural community and are seemingly not a priority.”

Openreach – the BT division that owns and operates most of the UK’s broadband network – has been asked by Mr Davies to provide an update on when Mr and Mrs Stoneman can expect to benefit from access to superfast fibre broadband.