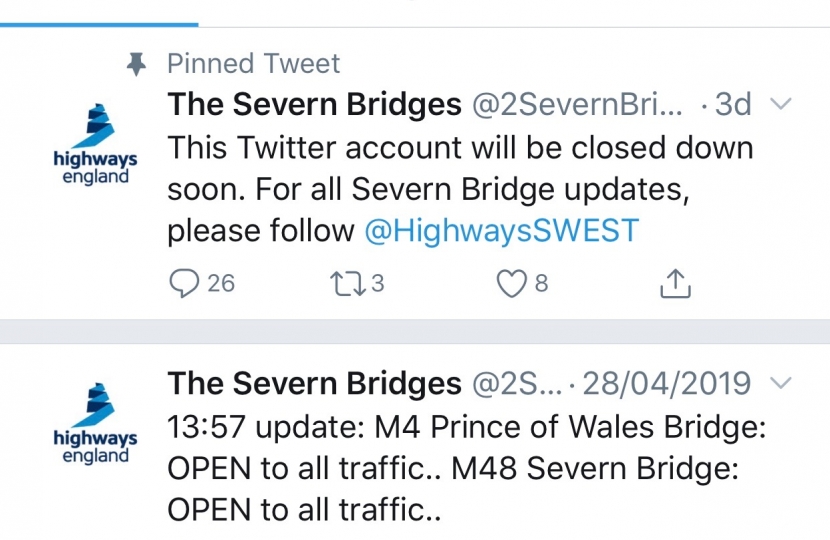 Highways England wants to shut down the feed and post all future updates about the Severn crossings via its south west account.

But Monmouth MP David Davies is calling for an urgent rethink, describing the news as a “really bad move”.

“Given that the bridges are a key strategic route in and out of Wales, this account is a vital source of information,” he said.

“For residents and commuters on both sides of the Severn, notifications about planned overnight decommissioning work or sudden bridge closures due to high winds are extremely helpful.

“To expect people to find bridge updates by scrolling through a series of tweets about vehicle breakdowns on the M5 near Exeter or A30 over Bodmin Moor on an account which covers the entire south west road network is somewhat short-sighted."

Mr Davies expressed further concern after learning that the Severn bridges website has also been decommissioned.

“Before, it was easy to see with a couple of clicks when bridge closures were going to be in place,” he said.

“Now you must navigate through the Highways England website, which is a complete maze, and search for information on a spreadsheet. It is no longer straightforward.”

He said he would be urging Highways England to reinstate part of the old website or replace it with something simpler to use.

“A local community councillor tells me this is of special interest to residents in Tintern who currently have to negotiate a long diversion due to the closure of the A466 for seven weeks and need to plan their journeys very carefully,” said Mr Davies.

Responding on Twitter, the regional director for Highways England said he was “exploring the reasons for closing the Twitter feed with colleagues”.

He added: “I understand the value this service offers and will see what I can do to maintain the service.”