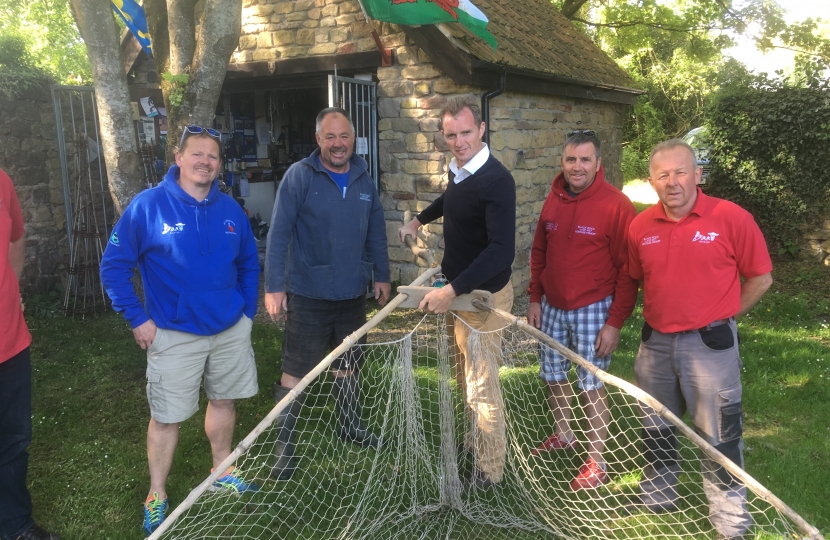 A petition to keep a centuries-old fishing tradition alive in the Severn Estuary has gathered support from local MP David Davies.

The future of the Black Rock Lave Net Heritage Fishery – which celebrates its centenary this year - is in doubt after a Habitats Regulations Assessment carried out by Natural Resources Wales (NRW) ruled its practice is adversely affecting salmon stocks.

Members of the fishery lease the use of the estuary from NRW and are required to apply for individual licences on an annual basis. Their current 10-year lease was renewed in 2018 with a strict catch limit of five salmon per month during the three-month season (June to August).

Over the past 25 years, average catch for the entire season is around six.

The fishermen have recently applied for their 2020 summer licences. But new regulations requiring the mandatory catch and release of salmon on all Welsh rivers is threatening the fishery with closure.

They have launched a petition against further restrictions from NRW, instead calling to be allowed to catch 15 salmon a season as per their previous agreement. Almost 2,000 signatures have been collected to date.

Monmouth MP Mr Davies has visited the fishery in Portskewett on a number of occasions.

He said: “The fishermen use knowledge that has built up over centuries to walk out into the Severn at low tide, avoiding quicksand and being wary of the tide coming back in. They then use a traditional lave net to fish by hand for salmon.

“The aim is not to catch large numbers of fish but to maintain a tradition. Some might call it a little eccentric and wonder why they do it. I think it is fantastic they do so. Like climbing dangerous mountains or surfing big waves, they go out and fish because they can.

“Now NRW is trying to put an end to it by banning the catching of any salmon at all. We all understand the need to conserve salmon stocks, but the lave net fishermen catch only a handful a year. A single catch is a huge deal and they celebrate by eating the fish. Throwing them back into the water would do no good as the fish would be unlikely to survive for long after entering a net.”

Mr Davies has asked NRW to consider a compromise and allow the Black Rock Lave Net Heritage Fishery a maximum of eight catches per season.

“I very much hope this will get a positive response,” he added.

“NRW should be mindful of the need to conserve ancient traditions as well as ancient fisheries”.

You can find out more or sign the petition at https://you.38degrees.org.uk/petitions/save-black-rock-lave-net-heritage-fishery