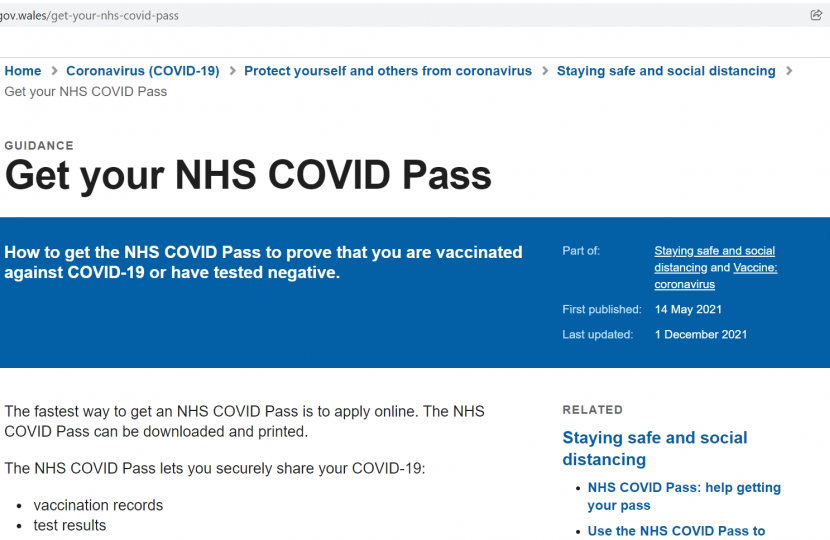 The Welsh Government has been heavily criticised after admitting the NHS Wales Covid pass is currently unable to accept as evidence Covid-19 tests that have been processed in Welsh laboratories.

Monmouth MP David Davies said he was “astonished” to be told only tests processed in laboratories in England were acceptable.

Mr Davies raised the issue with Welsh Health Minister Eluned Morgan after he was contacted by several constituents who had been vaccinated in Northern Ireland or abroad and were finding it difficult to get a Covid pass in Wales.

The MP revealed his surprise at learning the Welsh Government still has no way of validating or checking the authenticity of vaccines which are administered elsewhere, leaving people struggling to access the Covid pass service.

He was even more surprised when, in an initial written response, the health minister confirmed there is no current mechanism to “ingest vaccination data from Northern Ireland into the appropriate systems that will allow data to be surfaced in a Covid pass” – although work is ongoing to develop a solution.

When pressed for information about how systems are operating, Ms Morgan revealed there is a further problem with tests processed at laboratories in Wales.

“For individuals whose test results do not yet appear on the pass, they will be able to present evidence via text or email and this [will] enable them to access events and venues. The pass can be used for domestic and international travel purposes.”

As well as using the NHS Covid pass to show they have had both vaccines, people in Wales can provide evidence of a negative lateral flow test taken within 48 hours of an event or attending a venue. Test results must be reported online.

However, Mr Davies said it seemed “nonsensical” to have introduced Covid passes before rectifying these anomalies.

“It not only causes implications for residents who would like to use the NHS Covid pass to travel or work abroad but means those affected are also unable to access Covid passes that are now legally required in Wales,” he said.

“With the Welsh Government refusing to rule out the possibility of extending passes to the hospitality sector over Christmas for entry into pubs and restaurants, it is now absolutely imperative that everyone who has received doses of the vaccine can access this technology to ensure unnecessary restrictions are not placed on people on their home soil through no fault of their own.

“I find it extraordinary that the Covid pass system cannot cope with tests that have been processed in laboratories run by NHS Wales. The sooner the Welsh Government has a system that can cope with vaccination and testing information covering people in all parts of the UK the better.”

He added he had written to First Minister Mark Drakeford a month ago urging him to pause tests and suspend any planned extension of Covid passes until the Welsh Government “can be sure the system is working properly”.

Mr Fox said: “This latest problem reveals that when we thought things couldn’t get worse in Wales it’s actually necessary to think again.

“There are many serious questions that need answering without delay, including why the implementation of Covid passes was rushed through when there are huge problems that are undermining the system. On the face of it, this latest incident is a classic example of the left hand not knowing what the right hand is doing.

“Rather than prioritising their deal with Plaid Cymru, Welsh Labour ministers need to urgently sit up and introduce a credible system that will accept vaccination and testing information from all parts of our United Kingdom.

“I will be pursuing this deeply troubling situation quickly with Welsh Labour ministers in Cardiff Bay.”