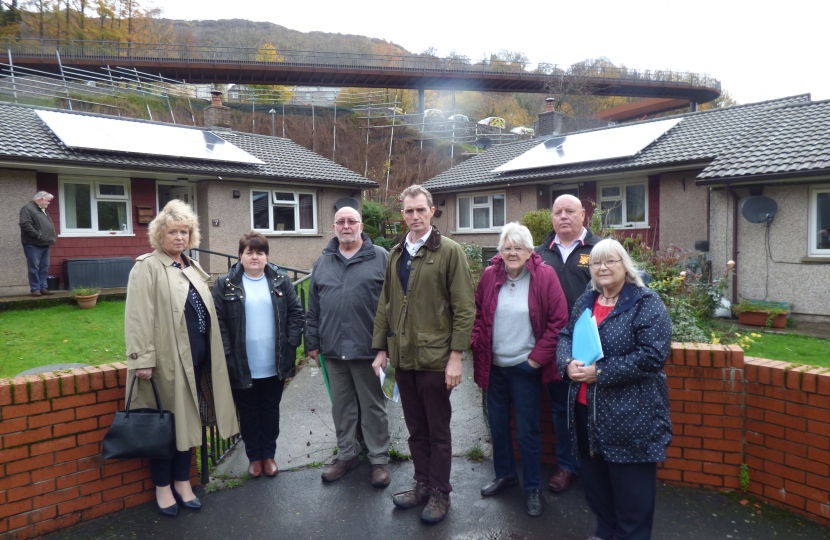 Monmouth MP David Davies and local County Councillor Jane Pratt have called on the Assembly Government to do more to help residents affected by the work taking place to dual the Heads of the Valleys road near Gilwern.

David and Jane were taken on a tour of the area by Adrian Edwards the Clerk to Llanelly Community Council.

Beginning in Gilwern the group travelled along the narrow tram road between Gilwern and Maesgwartha which is being used as a rat-run by vehicles when work is taking place on the A465.

"This road is completely unsuitable for large volumes of traffic and HGVs are banned. Yet on the day we visited we happened to see a 40T lorry trying to navigate the narrow lane hitting branches as it went through. Adrian and Jane showed me where the lane is deteriorating at the sides. I fully support Jane and Adrian in urging the police to do more to monitor the use of this lane.

Later the group visited some of residents at Dan y Coed cottages at Clydach where a huge flyover has been built over the houses.

"People have had to put up with a huge amount of voices and inconvenience while this has gone on and the flyover allows people to see straight into their bedrooms. I will be writing to the Welsh Government asking them to pay for the flyover to be screened so that at least residents will have some privacy.

The group also met with a resident who has suffered from damp after the work took place and finally went to the "legacy site" which will be handed over to the community when the work has finally been completed.

"After 5 years of dust, noise, road closures, and general inconvenience the Welsh Government are handing over a two and a half acre brownfield site which is contaminated with various materials. Unfortunately, there does not seem to be any money to do anything with it which makes it a fairly hollow gift."

"It was very useful to meet the residents and to hear first hand the problems they have experienced. We need Welsh Government Ministers to do the same. They have been happy to turn up in the past for a photo opportunity in hard hats at the site. Next time they should spend a bit of time talking to local people and offering to support them more in resolving some of the problems.