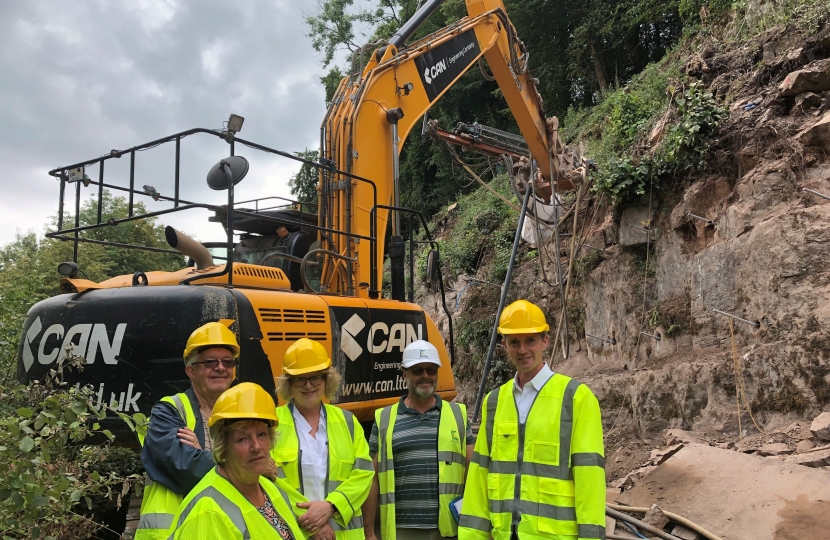 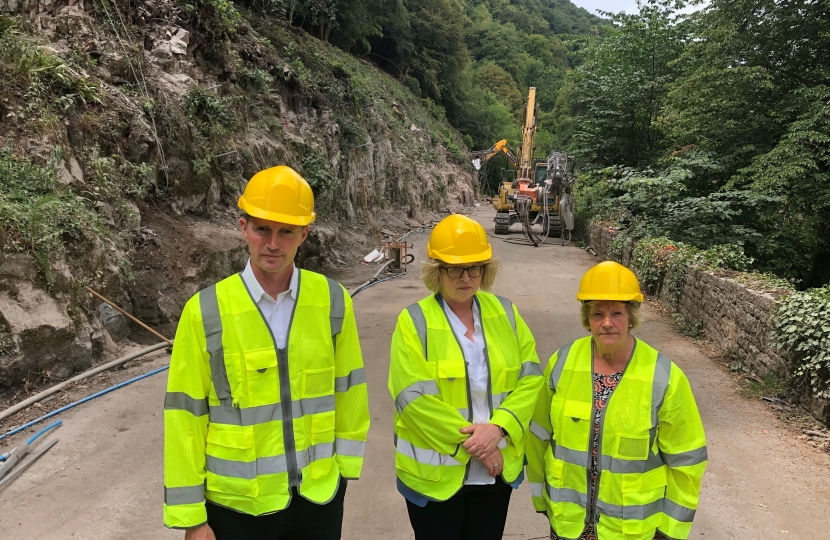 Monmouth MP David Davies has joined a group of councillors on a site visit to view ongoing repair work to the roadside embankment on the A466 between St Arvans and Tintern.

The meeting on Wednesday (17 July) took place amidst growing anger from residents and business owners in the Wye Valley at the failure to get the road reopened.

Stabilisation works have fallen behind schedule, with the contractor CAN hampered after three of its four specialist drill heads became jammed in the limestone rock face.

A new completion date of 2 August has now been set - it was originally 19 July – and the A466 will remain closed until the work is finished.

In the meantime, anyone needing to get to Tintern from the Chepstow direction either has to follow a long detour via Monmouth or use a narrow lane which is unsuitable for large vehicles and is falling apart under the strain of traffic.

Mr Davies heard how there are four sections of the A466 being worked on – a total of over 200m.

He said: “On the first sections, the rock has simply been cut back to a gradual slope. But further along the rock face at the side of the road it becomes a lot steeper.

“The contractor is stabilising it by drilling steel rods into the rock face, bolting them in, then surrounding everything with a wire mesh.”

However, Mr Davies revealed work has been complicated by environmental rules.

“It is a designated Special Area of Conservation and a potential roosting area for bats,” he explained.

“This greatly restricted the kind of work that could be carried out, as well as making it necessary to wait until the spring – scant consolation to those who are losing business during the peak tourist period.

“While the situation on site has been extremely tricky, we were told that 80 per cent of the drilling has now been done. The drilling is the major part of the project so hopefully it will all be completed early in August.

“As far as we could see, everything that could be done is being done to get it finished.”

Local County Councillor Ann Webb described the visit as “well worthwhile” and said it was “very challenging” for those working on site.

“I have been liaising with local businesses to keep them informed and fully understand their concerns, so I wanted to come down and see things for myself,” she said.

Angus Ashman, a community councillor from Tintern who also works as a building surveyor, said: “There have undoubtedly been major difficulties here.

“It is interesting to see the techniques the contractor has developed to deal with this, but the timescale is disappointing.”

Cabinet Member for Infrastructure Cllr Jane Pratt added: “The narrowness of the road and the potential danger from drilling into an unstable rock face has made it difficult to increase the numbers on site.

“I felt it was important to view these constraints first-hand in order to fully appreciate what the works entail.”