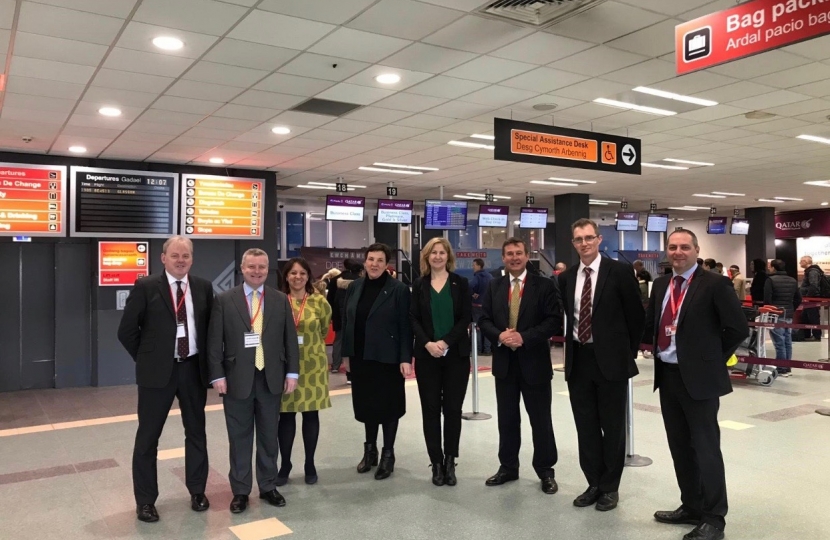 Now is the ideal time for devolving flight tax to Wales, a leading Welsh MP has insisted.

The comment by the chair of the Welsh Affairs Committee comes as concerns about a no-deal Brexit has seen the value of the pound continue to fall on currency markets.

David Davies, MP for Monmouth, said devolving air passenger duty (APD) would be good for all of Wales.

He is urging Welsh Secretary Alun Cairns and junior Wales Office minister Kevin Foster to back a unanimously-agreed report by his committee which strongly recommended that the UK Government should hand over control of APD in Wales to the Welsh Government by 2021.

The Welsh Government, which owns Cardiff Airport, has long argued for powers over APD to allow it to attract more long-haul flights.

But the UK Treasury has refused, stating it could give Cardiff a competitive edge over Bristol Airport.

Mr Davies said that “even if this were true”, the Welsh Affairs Committee and the Wales Office exist to “serve the people and interests of Wales, not Bristol”.

In a joint letter to Mr Cairns and his deputy, Mr Davies said: “Devolution of APD is supported by the unions, business groups, the managers of Cardiff Airport, the Welsh Government and was recommended in the Silk Commission report.

“Members of the Welsh Affairs Committee from all parts of Wales and from all political parties were unanimous in supporting this, including myself.

“I have always been cautious about devolving extra powers to the Assembly but on this occasion, I have no hesitation about the advantages.”

Since the committee’s report was published in June 2019, sterling has taken a further fall against the euro and US dollar – making foreign holidays more expensive.

“Devolving APD in Wales would give the Welsh Government the opportunity to cut the tax and make flying cheaper for hard working families who want a holiday abroad,” said Mr Davies.

“So with a new Prime Minister and Chancellor looking to mitigate the short-term challenges of a hard Brexit, I believe this could be an ideal moment to devolve APD, which would be good for all of Wales.”

Mr Davies added he would be seeking a meeting with the Treasury once Parliament returns after summer recess in September but was hoping to secure an “expression of support on this issue” from the Wales Office in the meantime.

Pic cap: David Davies MP and members of the Welsh Affairs Committee during a visit to Cardiff Airport in February 2019.