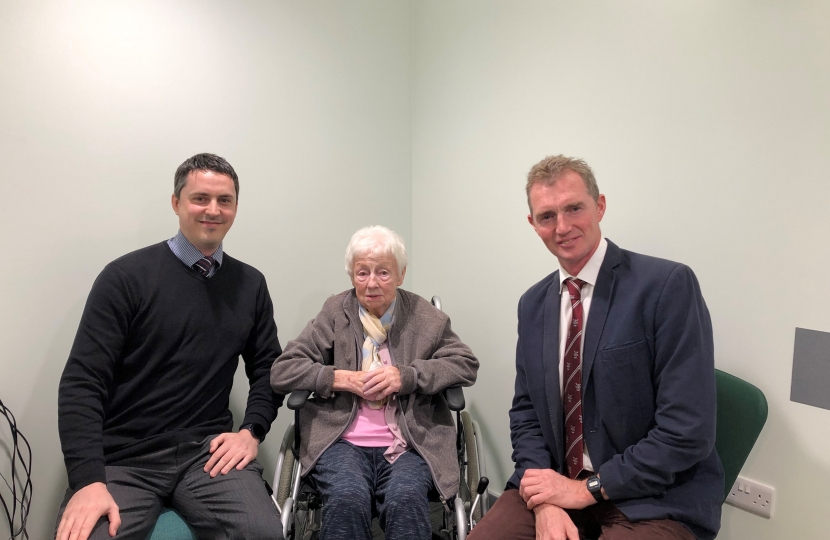 A great-grandmother from Abergavenny who faced an 18-month wait for a hearing test has now been treated after her MP intervened.

The 89-year-old was referred to Newport’s Royal Gwent Hospital for an audiology reassessment on 16 July 2018 following a visit to the open access hearing aid repair clinic at Nevill Hall Hospital in Abergavenny.

She was still awaiting an appointment over a year later.

Mr Davies then discovered that in England, the NHS has dramatically reduced waiting times for hearing assessments and hearing aids by using qualified community audiologists, many of whom are based in local opticians.

He said: “Opticians are not just about eyes. Increasingly, they offer other services including dealing with hearing problems.

“In England, community audiologists are contracted to provide hearing aid services to NHS patients. It saves the NHS a large amount of money and means patients can be quickly treated.

“Mrs James is in failing health with restricted mobility. She told me playing with her great-children is the only thing worth living for. Yet the problem with her hearing was severely affecting her ability to interact with them or get involved in conversations.”

After learning about the plight of Mrs James, the National Community Hearing Association (NCHA) – the sector body that represents all community audiologists providing NHS services in the UK – offered to help.

NCHA put Mrs James in touch with Specsavers, which fitted her with two new hearing aids at its Monmouth store.

Mr Davies met with Mrs James and Stephen McAndrew, Director of NHS Services at Specsavers, after her hearing rehabilitation appointment on Wednesday (2 October) when audiologist Christopher Ward checked everything was fitting well and working correctly.

“I am really looking forward to playing with my great-grandchildren again and I am extremely grateful to Specsavers and Mr Davies for arranging this,” said Mrs James.

With NHS Wales’ current strategy on hearing loss ending in 2020, Mr Davies is hopeful this will create the opportunity to press the Welsh Government to consider commissioning community audiology from independent providers as the NHS does in England – and as NHS Wales already does for community optometry.

“Huge numbers of people who are currently waiting for hearing aids in Wales could benefit from a scheme similar to the one being run in England which allows independent community audiologists to fit them,” said Mr Davies.

“There is every reason to follow England and start making use of these facilities to slash the waiting times for people who need audiology assessments and hearing aids.”

Mr McAndrew added: “Hearing loss sadly brings problems of loneliness and depression and an increased risk of accidents which then require hospital treatment.

“Early treatment of hearing loss is also likely to be far more effective for the patient.

“We were pleased to be able to help Mrs James on this occasion to show what we can do and it would be great if NHS Wales considered using companies like ours to provide hearing loss services in the community.

“This is hugely successful in England and there is no reason why we can’t do it here.”