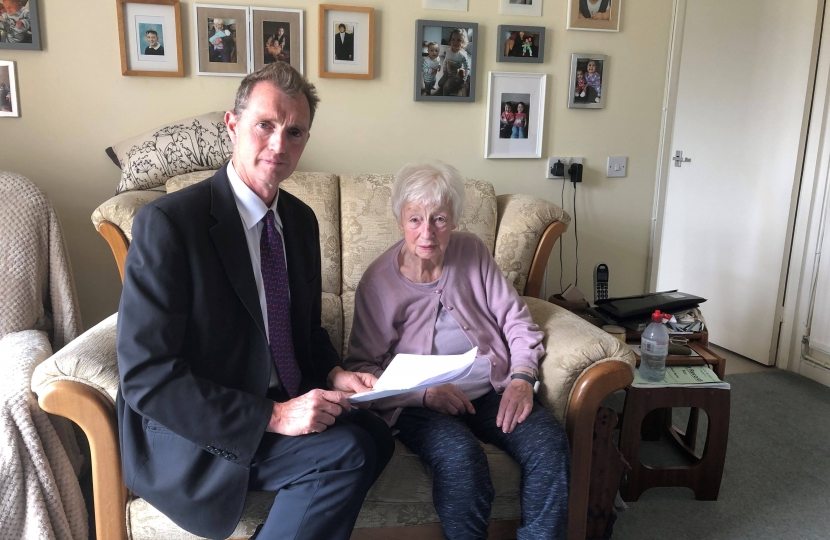 A great-grandmother from Abergavenny is facing an 18-month wait for a hearing test.

The 89 year-old was referred to Newport’s Royal Gwent Hospital for an audiology reassessment on 16 July 2018 following a visit to the open access hearing aid repair clinic at Nevill Hall Hospital in Abergavenny.

She is still awaiting an appointment.

Monmouth MP David Davies has raised Mrs James’ case with both Aneurin Bevan University Health Board and the Welsh Government.

Yet in a letter to Mr Davies, the health board admitted the current waiting time for a reassessment is around 80 weeks.

Staff shortages within the audiology service has resulted in a backlog of patients and a build-up of reassessment appointments, it said.

Meeting with Mrs James at her home in Victoria Street, Mr Davies said he was saddened to learn how her hearing loss is having such a profound impact on everyday life.

“Mrs James is in failing health with restricted mobility. She told me playing with her great-children is the only thing worth living for. Yet the problem with her hearing is severely affecting her ability to interact with them or get involved in conversations,” he said.

While Mr Davies acknowledged a growing and ageing population will inevitably increase pressure on NHS and social care services, especially as life expectancy continues to rise, he described the 18-month waiting list for hearing reassessments as “ludicrous”.

He added: “The reality of such long waiting times is that for people in the later stages of life, such as Mrs James, the greatest pleasure of communication with loved ones is being denied – making them more isolated and vulnerable.

“There must be a lot of other people in the area experiencing similar problems and it is completely unacceptable.

“This is certainly not a criticism of our hard-working hospital staff but a failure of health board management to ensure it is able to provide a sustainable audiology service.”