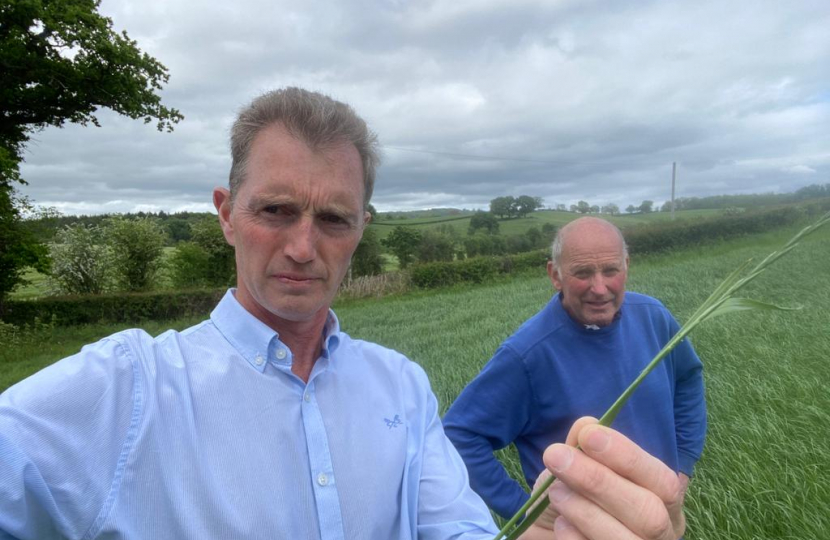 Farmers have warned of higher food prices and a possible shortage unless the cost of fertiliser comes down.

The Ukraine war has sent fertiliser costs soaring up to four times higher than this time last year.

NFU Cymru member Lyndon Edwards said some farmers might need to cut livestock numbers and reduce production as a result.

He is concerned that the enormous increase in prices per ton of fertiliser and tightening of supplies will have a huge impact on food prices over the next 12 months.

Monmouth MP David Davies met with Mr Edwards, who farms at Dingestow, to discuss the situation.

Fertiliser - in the form of nitrogen, phosphate and potash – is applied to crops in a balanced form to meet growth, health and productive requirements. Without fertiliser, fields will only yield about half as much.

After walking through several fields in the area, Mr Davies said: “Even as a layman, it was easy to tell which fields had received fertiliser and which had not.

“The impact was very obvious, with bare soil under your feet in the fields which had not been fertilised.

“We looked at barley and grass, which is intended to end up as cattle feed. If farmers cannot grow adequate amounts of feed for cattle and pigs, then they will have to import from elsewhere and transport it.

“Either way, this will create further increases in prices on top of those which have already been seen.”

The UK Government is working with the NFU on ways to ensure adequate supplies are delivered.

In England, a change in rules and new Defra measures have been welcomed, which allow more flexibility on autumn manure spreading for the coming growing season without the need for as much fertiliser.

“Small steps like this, while not the whole solution, will certainly help farmers with many of the challenges they currently face in agriculture,” said Mr Davies.

“We need a few more support measures here in Wales too.”

Mr Edwards said: “I was extremely grateful that David took up my invitation to walk and inspect various crops locally that had received varying levels of inputs.

“Fertiliser this year is three to four times the price of last year, some rising from under £300 per ton to over £1,000 per ton. It is therefore unsustainable, particularly for beef, sheep, pig and poultry producers, to apply fertiliser in any great amount.

“The effect of this will probably be that farmers will reduce livestock numbers, which will lead inevitably to food shortages and consumer price increases.

“We are not getting the returns from the market place to cover these input cost increases.

“We need the livestock to supply quality protein for what is an ever growing and hungry world population. This is far more important than taking over productive land to plant trees!”