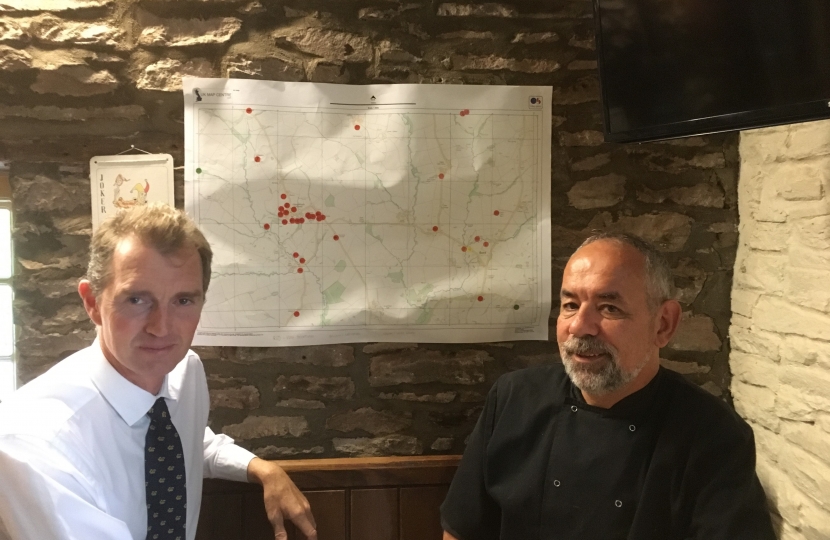 Monmouth MP David Davies has called on Welsh Government Minister Julie James AM - whose responsibilities include digital infrastructure and inclusion - to come clean about the reasons for delays to the rollout of superfast broadband to nearly 90,000 mainly rural properties across Wales. Last year, Mr Davies said that the whole point of the Superfast Cymru scheme was that British Telecom (BT) would receive £425m in return for connecting the vast majority of premises in Wales to next-generation broadband. In reality Welsh Government has failed to deliver.

Further details of another scheme were due to be announced in July, but at the start of August the Minister, Julie James AM, suddenly announced that “unforeseen issues” were causing delays which could not be further discussed because of “commercial confidentiality”

Llangattock Lingoed is one community that is still waiting for a proper connection much to the frustration of residents like Chris Bateman, landlord of the Hunters Moon Inn.

Despite frequent complaints to BT, Mr Bateman told Mr Davies that he considers himself lucky if the internet speed reaches 1MB, often it is only 0.5MB and sometimes disappears altogether.

The slow speed means that it is difficult to conduct business and access vital online services, with websites and credit cards being effected. “Sometimes I have to ask everyone to put their phones down just so that I can put through a credit card transaction” said Mr Bateman. Fed up with waiting he and other residents are now going to try and get better speeds using bean technology.

“In this day and age Broadband is a necessity whether for conducting business, filling in government forms, keeping in touch with family or simply enabling children to do homework.

It is not good enough for the Minister responsible to casually announce delays to the next stage of Broadband rollout and refuse to even offer a proper explanation. Accessing reliable broadband is increasingly important to small businesses and the personal lives of users, however, there is a broadband digital divide where rural communities and small businesses are suffering.

I have written and asked for some transparency and for a clear timetable. People in many rural areas of Monmouthshire such as Llangattock Lingoed have waited long enough.”