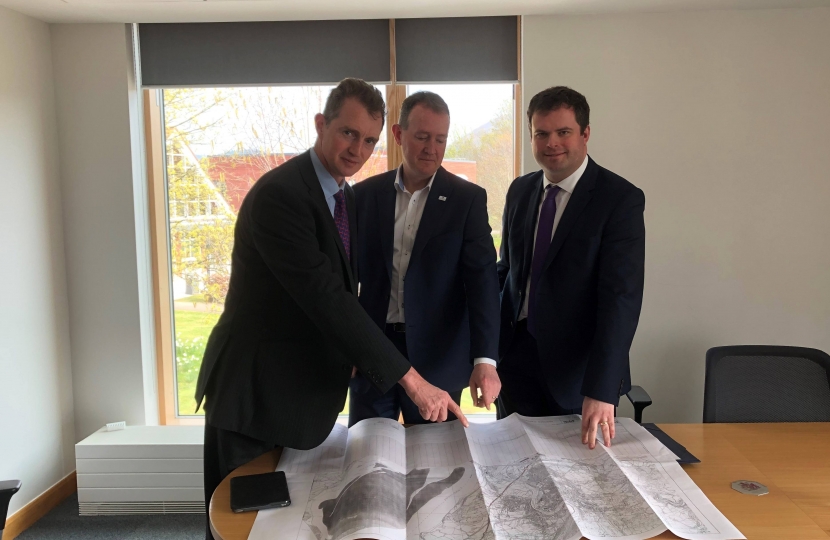 The new Wales Office Minister has made his first official visit to Monmouthshire to discuss plans for a Chepstow bypass.

The idea of a bypass has long been mooted as a solution to Chepstow’s chronic congestion and pollution problems.

Traffic bottlenecks on the A48 at Hardwick Hill and A466 High Beech roundabout have suffocated the town, while air pollution levels exceed limits set by the World Health Organization (WHO).

With the end of tolls on the two Severn bridges and several hundred new homes planned either side of the River Wye, it is feared that further development will cripple Chepstow unless these road infrastructure challenges are tackled.

Monmouth MP David Davies is a strong supporter of a bypass linking the Forest of Dean directly with the junction of the M48 Severn Bridge and taking traffic out of Chepstow.

“This is a cross-border project which will need support from the UK Government, Welsh Government and Monmouthshire and Gloucestershire county councils,” he said.

“Most of the bypass would be in England with arguably the majority of beneficiaries in the Chepstow area, so anyone can see that there is going to have to be a high level of cooperation across different arms of government in both England and Wales to get it built and paid for.”

The first stage report known as Welsh Transport Appraisal Guidance (WelTAG) has already been completed. The next step is to go ahead with WelTAG2, the detailed report setting out a possible route for the bypass and associated costs.

Mr Davies said: “This would be quite expensive and I would like a commitment from the UK Government that it will contribute a third of the cost.

“We had a very positive meeting and the Minister clearly recognised the importance of the work being done by Monmouthshire County Council. I think there is a good chance we will be able to get together the funding for WelTAG2.

“Once that has been completed, the real work will be in developing a joint business case and agreeing on funding for the construction of the bypass itself."