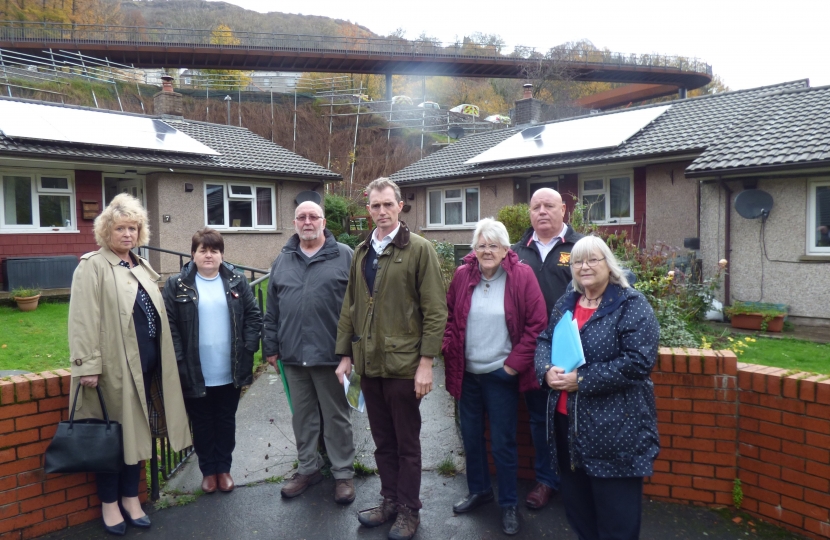 Monmouth MP David Davies has cautiously welcomed a site visit to the delayed A465 dualling scheme at Gilwern by the Welsh Transport Minister.

Ken Skates has agreed to meet with local community leaders and senior officials from Monmouthshire County Council on 21 January to discuss ongoing concerns surrounding the project.

It will be the first time the Minister has come to the area most affected by the construction works, which involve widening the Heads of the Valleys road through the Clydach Gorge.

Dualling of the four mile stretch between Gilwern and Brynmawr started in early 2015. The scheme was due to be completed by spring 2019 but has been delayed until the autumn at an estimated cost of around £270m – with a projected overspend of £50.83m.

Mr Davies said the Welsh Government needed to do more to help residents who have suffered years of noise, dust, road closures and, in some cases, potential damage to their property.

“I would give a cautious welcome to the fact Ken Skates has finally decided to visit the area,” said Mr Davies.

“It’s no good the Minister and his project team simply turning up in high-vis vests and hard hats for a self-congratulatory photograph. They should be talking to residents and businesses on the ground and offering support to resolve some of the problems.”

Local County Councillor Jane Pratt said she remained concerned about the number of weekend road closures set to take place this year and is campaigning for police to tackle speeding traffic using the narrow lane between Gilwern and Maesygwartha as a rat-run.

“We have already been notified of 11 closures on the A465 between now and the summer, which will continue to cause huge inconvenience for local residents who have put up with this for four years,” she said.

“Last year we were told of a similar number but the reality was we had 29 road closures.

“The speeding traffic, abusive behaviour and language and damage to residents’ property goes unchecked, while HGVs are ignoring warnings and using the surrounding lanes at every closure weekend.”

Councillor Pratt also said she would like to see the Welsh Government’s offer of a community legacy at the old cement works in Clydach backed up with funding to provide an educational and leisure facility for school children, residents and visitors.

“The stretched budgets of Monmouthshire County Council will not be able to develop this historically important but totally neglected industrial site,” she said.

“Here is an opportunity for the Welsh Government to leave a sustainable long-term legacy that will help to compensate for the years of misery endured by the local population whilst this road has been completed.”

A further public meeting to hear residents’ concerns is to be held at Gilwern Community Centre on Wednesday 30 January at 7:00pm.

Pic cap: David Davies MP and Cllr Jane Pratt with residents in Dan Y Coed, Clydach, where a flyover has been built above the bungalows as part of the A465 dualling scheme.