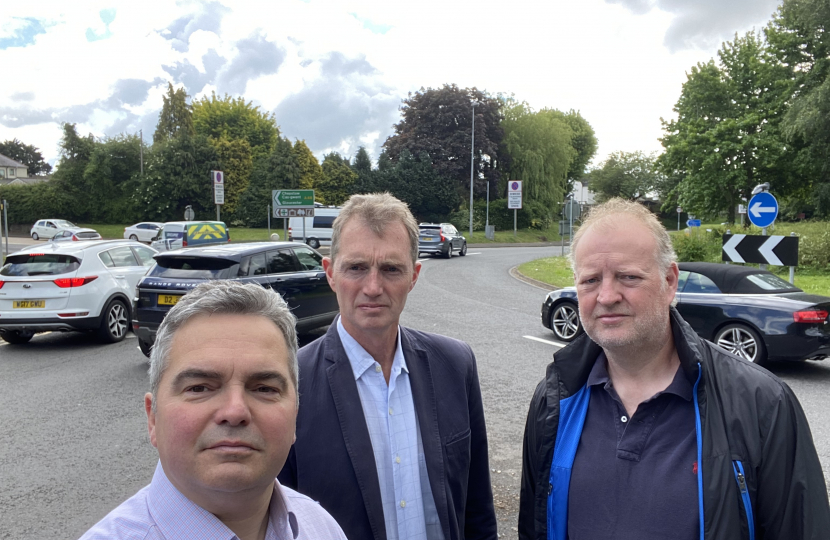 Calls for a yellow box to ensure traffic flows smoothly through a busy Chepstow junction have received backing from the town’s MP.

Highbeech roundabout has become a bottleneck during peak times, with motorists stuck in long queues when travelling from the A48 towards the M48 Severn Bridge.

To alleviate congestion and allow traffic clear access to cross the roundabout, residents have put forward the suggestion of a yellow box junction.

It is an idea supported by David Davies MP, who visited Highbeech with Chepstow county councillor Christopher Edwards to meet resident Phil Tate.

“This is a reasonable and eminently sensible request,” said Mr Davies.

“The lack of improvements at Highbeech roundabout are exacerbating congestion along an already busy route.

“We need yellow box junctions or some form of traffic management so vehicles coming from the Chepstow end are able to cross the roundabout during busy times.

“It is disappointing Welsh Government has scrapped the option to build an M4 relief road but there is much that can be done to alleviate problems in Chepstow, which has been blighted by traffic congestion and air pollution for far too long.”

As well as asking Welsh Economy Minister Vaughan Gething to consider installing a yellow box junction, Mr Davies has urged the new Labour-led Monmouthshire County Council to get behind plans to bring about improvements to Highbeech roundabout.

Cllr Edwards said: “For many years, tackling traffic congestion was meant to be a priority for the Welsh Government but they sadly continue to let us down by simply not seeming to appreciate that the levels of traffic congestion and air pollution in Chepstow is unacceptable.

“It's bad enough that over the years they appear to be forever kicking the issue into the long grass as their strategy seems to be one of holding one review after another.

“Now we have just discovered that Welsh Government have pulled the WelTAG2 funding on the study of options for improvement of the Highbeech roundabout for this year due to other priorities across Wales, dealing yet another blow to Chepstow residents and the town."

Mr Tate added: “Congestion on the A466 has become significantly worse at peak times due to queuing vehicles on the Larkfield (Highbeech) roundabout.

“This raises pollution in an area with already high pollution levels. Increasingly drivers are doubling up into the opposite lane in order to pass stationary vehicles, creating a collision risk.

“A yellow box section on the roundabout must be a cost effective and easily deployable solution to this issue.”