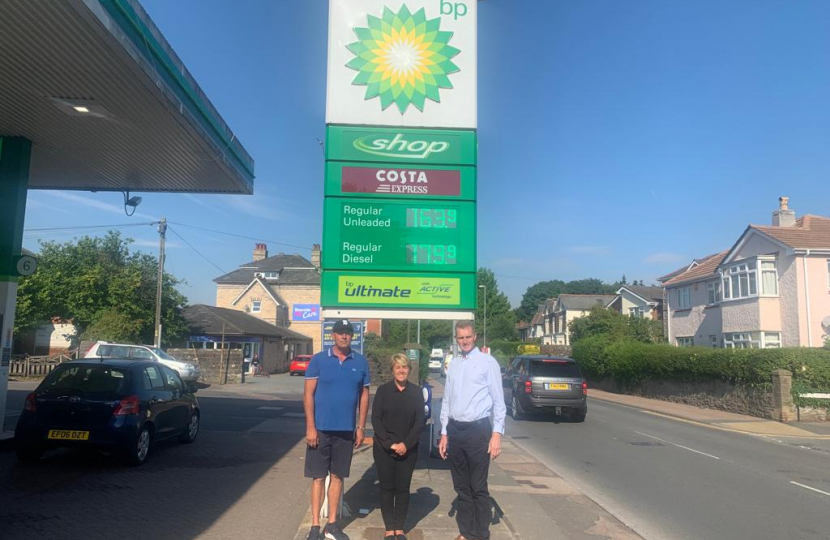 Filling stations should follow the lead of an Abergavenny garage boss and lower petrol prices, the town’s MP has said.

Bailey’s Garage has made headlines after selling the cheapest fuel for miles around.

Drivers have been flocking to the independent garage on Brecon Road since it dropped petrol to 169p per litre three weeks ago – 20p cheaper than the supermarkets.

Owner Ian Bailey has since slashed prices even further, from 167.9p a litre to now just 163.9p.

According to the RAC, the current average price for unleaded petrol across the UK is 184.5p per litre.

Monmouth MP David Davies visited the garage and met with Mr Bailey to find out how he is able to offer such competitive prices at the pump.

“Ian went through the figures and explained that he buys fuel on a system which sets the cost of petrol and diesel based on the fluctuating prices of crude oil,” said Mr Davies.

“As an independent business, he can then decide how much of a mark-up he puts on the price at the pump. He gets two fuel tankers in every day and is four times busier than he has ever been.

“It is baffling why others can’t match Ian’s prices. He told me it is only fair that he shouldn’t profiteer from the falling cost of fuel, so the real question is why other garages have not followed suit.”

To thank the local community for its support over half a century of trading in Abergavenny, Bailey’s Garage also wanted to lower prices to repay customers during what are difficult financial times for many.

“One or two local residents have complained about the influx of vehicles and long queues on the approach to Brecon Road,” added Mr Davies.

“But it is not surprising that when we face a global cost of living challenge, people are going to want to get cheap petrol. I know I do.

“Ian and his wife Julie are doing a great job and offering an excellent service to the town of Abergavenny."